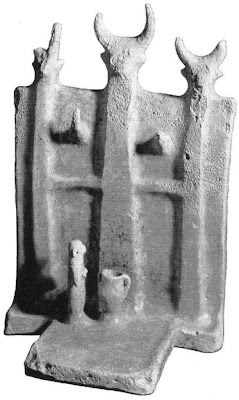 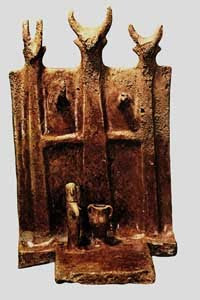 Isn't this the most gorgeous, evocative little sanctuary model? When I first saw it, in an archaeology class, I found it compelling. It is Cypriot, from Kotsiatis, dates to the Middle Bronze Age, and basically depics a female figure and a large jar in front of triple bucrania (bull's skulls) erected upon some sort of probably wooden pillars or structure. There is at present no evidence out in the landscape for this sort of structure, probably because it disintegrated, being wooden and bone - although it may have had a paved floor (or simply beaten earth) - but this is a type of ephemeral cult structure that would have been erected within the landscape or else possibly within a chamber tomb. It seems easy to envisage how it was constructed, and I can't help but think that structures such as this add historical authenticity to some of the imagery of Traditional Witchcraft, such as the stang. It's such a simple little shrine, as is the stang when embedded in the ground (but with a skull attached, not naked). I like that sort of minimal but evocative outdoor temple. Images of a mask of Dionysus and simple garment on a pole, as seen in Classical vase painting, are also in this vein. Although this Cypriot example looks a little more permanent than a single-pole version, but only just a little. Oh, and another thought... Wasn't Wiccan founder, Gerald Gardner's, novel "A Goddess Arrives" set in Cyprus? (I haven't read it). Not that I am suggesting any connection really... Just doing free association.
Posted by Caroline Tully at 2:55 AM

I've only seen excerpts from this film on youtube, but it remdinds me of the 'temple' in Medea by Passolini with Maria Callas.

I wonder if something like this inspired the set design for the film...

I know that Passolini Medea film, it's really good. I was just recommending it to someone the other day, I must watch it again myself though, I haven't seen it for years!

It is fascinating. Maybe you could persuade Sacred Source to have it replicated.

What was the jar for, do you think?

What was the jar for...? Well, seeing as it is set right in front of the shrine and it looks like the little figure is or was attending to it, I'd suppose that it contained a liquid offering to the deity of the shrine. An offering that the participants may also have partaken of, depending what it was. If it was blood they may not have shared it, but if it was wine they might have. I'm not sure about wine-making in Cyprus back then though... I suppose they did it, but don't really know. The jar could also have contained drier goods, not only liquids.

Hi Caroline,
This is an old post so I am not sure you will see my answer. However if you are able to view "Social Strategies, Ritual and Cosmology in Early Bronze Age Cyprus: An Investigation of Burial Data from the North Coast" by Jennifer Webb and David Frankel
you will see that such shrines have been found in the dromos (forecourt or open entrance passage) of a few Early/Mid Bronze Age rock-cut tombs in Cyprus. They are cut into the rock wall. Similarly jars like this have been found in front of the stone guarding the stomion (entrance hole into the tomb). They are believed to be for offerings to the dead. The tombs usually were used for several burials over quite long periods and there is evidence for multi stage treatment of the body, involving re-burial in a different, communal tomb after de-fleshing of the body has occurred. At this point, it is thought, the person became one of the ancestors. The fact that bird imagery (looking like vultures) starts to dominate the funeral pottery (rather than only bulls and other horned animals as before) suggests they may have used something like the Tibetan "sky burial" of allowing birds to remove the flesh from bodies.
You might be interested in my website: http://ant.david-johnson.co.uk