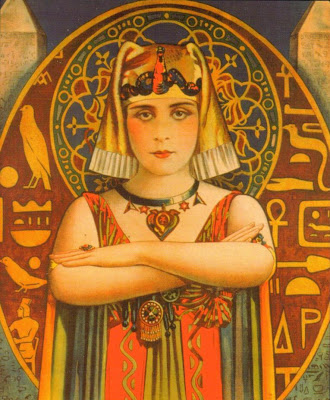 As part of my general interest in Egyptomania, I'm doing an essay on the reception of the Cult of Isis amongst the Roman elite from the Late Republic to the Flavian period. This has led me to an investigation into Julius Caesar's and Mark Antony's relationships with, of course, Cleopatra VII who termed herself the 'New Isis'. I was resisting looking at Cleopatra, having successfully avoided her for my entire life under the assumption that she was too horribly clichéd to bother with. (Is that a word - 'clichéd'?). However, after looking at primary sources about her, Cassius Dio, Appian, Plutarch, I'm finding her much more interesting than I thought she was. Shows that I shouldn't have been relying only on the Cleopatra of rumour (or Hollywood) - not that rumour is absent in ancient authors' stories of her either. I've also been reading up on the Ptolemaic Dynasty - fascinating! lots of killing of relatives and brother-sister marriage - as well as on Ptolemaic Alexandria. I can recommned Joyce Tyldseley's recent book on Cleopatra, as well as Sally-Ann Ashton's, Joann Fletcher's and Diana Kleiner's books as interesting, easy-to-read accounts. Plus, theres a fabulous, enormous book 'Cleopatra of Egypt: from History to Myth' by Susan Walker and Peter Higgs (Eds), published by the British Museum Press (2001) that is full of ace pictures and interesting essays. I'm still a bit sheepish about admitting that I'm looking at Cleopatra... But I shouldn't be. She really is much more interesting than I expected. Plus, there's all that "Was Cleopatra black? No, she was Macedonian" controversy that you can read about in Mary Lefkowitz. Will the ancient world ever cease to amaze and fascinate me? I doubt it.
Posted by Caroline Tully at 7:46 PM 1 comment: 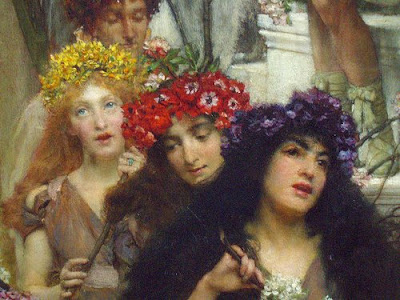 I discovered Pagan Reconstructionism around 2000. Before that I'd been heavily involved in Neo-Paganism. What is the difference you may ask? Well, Neo-Paganism derives from 20th century Wiccan Witchcraft in that it uses a 'magical circle and four elements' format, believing this to be the "authentic" structure of "Paganism" - as if there is only one "Paganism". Neo-Paganism also tends to act as if it is some sort of "outer court" of Wicca, a first step to Wicca, like the way a congregation is in relation to a priesthood. It makes sense that Wicca uses a magical circle format because Wicca is essentially magical, but "Paganism" is not. Pagan Reconstructionsim generally consists of people either fleeing from Neo-Paganism or coming from a historical re-enactment background. It tries to re-create ancient religion(s) from available primary sources such as texts and archaeology and is not usually focussed upon "magic". While intellectually I prefer Pagan Reconstructionism to Neo-Paganism (although I do agree that the latter has many good points), since going back to University specifically in order to study ancient religions I have actually become less inclined to religious practice or belief at all. In fact I'm rather fond of atheism. That does not mean that I don't still tremble in vertiginous awe at the universe and I'm still incredibly interested in religion(s) from many angles: aesthetic, structural, functional, but I can't say that I'm actually a full-on *believer* in supernatural beings - at least not to the point that I'm going to participate honestly in their cult (not that the Pagan Reconstructionist scene is very big in Australia anyway). I've been thinking that religious experience might very well be *aesthetic* experience for a few years now. I agree that there are many pleasurable sensory aspects about ancient religion and from the point of view of the 'Goddess Movement' certainly the discovery of ancient images of female deities is very empowering for women. It might surprise some people to realise just how huge the Pagan Reconstructionist scene actually is, consisting of types such as Celtic, Greek, Roman, Egyptian, Canaanite and Norse Reconstructionism. There are also several umbrella organisations. A lot of this exists on the internet where Yahoo Groups facilitate communication between enthusiasts, and there is also the phenomenon of 'virtual shrines'. Pagan Reconstructionism is also popular in Lithuania, Greece and probably lots of other places too. I have heard that Classicist, Sarah Iles Johnston, is going to write a book on Greek Reconstructionists, who, if you recall newspaper articles about them coming out of Greece in the last few years, are very vocal about having Greek Paganism legalised. This really is quite a fascinating topic that I'm particularly interested in, these days, from the perspective of the uses of "The Past" by contemporary Pagans. One of the useful books that is not exactly on Pagan Reconstructionism but is on the interaction between modern Pagans and Archaeologists and Heritage sites in the UK is Jenny Blain and Robert Wallis "Sacred Sites Contested Rites/Rights". The authors are both academics and Heathens - and this is not an unusual mix if you are aware of Pagan Studies - the academic study of Contemporary Paganism. From another angle, British Archaeologist, Francis Pryor, talks about the problems Archaeologists in the field can have with Pagans who claim "ancestral rights" to a particular ancient site. Then there is Catalhoyuk at which Ian Hodder has actively tried to address the interests of the Goddess Worshippers who frequent the site as part of his Post-Processualist approach. I could write about this all day, citing interesting example after example, but alas - no, actually hooray - I must attend to an essay on the reception of the cult of Isis in Rome.
Posted by Caroline Tully at 4:43 PM 6 comments: 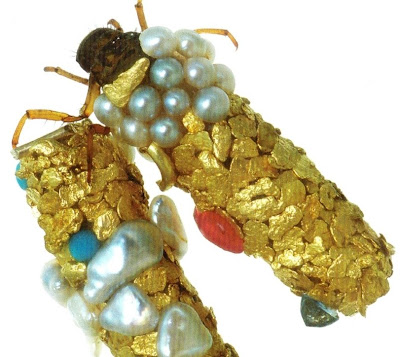 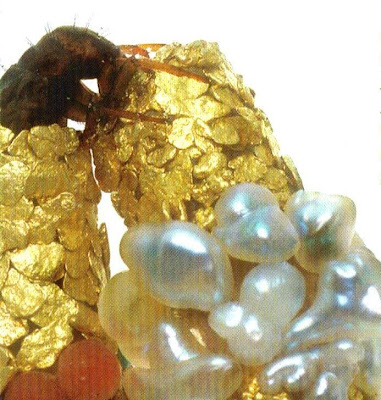 I've severely neglected my blog, the reason being that I'm spending all my time on my University studies - yes, all my time! Oh, except for the time that I'm working, sleeping, and otherwise sustaining myself. So, here's a new installment. Bug Art. This is art 'created' by a French guy called Hubert Duprat and these pictures are from an exhibition called 'The Idea of the Animal' at RMIT Gallery in 2006. When I saw these images on the invitation I was excited. I'm very partial to anything that might be [masquerading as, or really] jewellery. So I went up to RMIT to check these bug and jewel things out. I thought they'd be about the size of say, a lipstick container, but they weren't. They were much smaller, about the size of, um, your little finger nail (if its a long one, and not bitten or otherwise defaced). So, these are caddis fly larvae which usually make their little coocoon-things out of whatever's around, sticks, leaves, tiny pebbles. I thought that Duprat had made these little gold and jewell 'cases' for the bugs himself, and was impressed by that. But in fact what happens is that he only allows the bugs access to these materials - gold flecks, turquoise, pearls etc - to make their own cases with. So the bugs made the gorgeous gold cases, not Duprat. I was less impressed by this. I had initially been admiring what I thought was the artist's choices in materials and construction, when I found out that it was the bugs' choice(s), although I still find them really beautiful I was a bit less impressed. While at the gallery there was a video on a very large screen - it took up quite a bit of one of the walls - of the bugs at work making their cases out of the material Duprat allowed them. Some of us watching the video were asking 'Is this actually ethical? Are the bugs being exploited?' But we weren't really sure of the answer to that. So in the exhibit the bugs, which live in water, were walking around with these cases on their backs, there were also some empty cases in another area. I wondered whether the bugs' spittle, or whatever they use as glue, was strong enough to make these things able to be used as actual jewellery, but I don't know. Here are some more useful links on this topic. All gorgeous though, whoever gets the credit for 'making' them.
Posted by Caroline Tully at 5:56 AM 1 comment: