Witchcraft and Paganism: What's the difference? 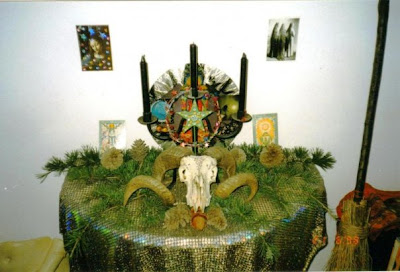 Regarding modern Witchcraft / Wicca and Paganism, and also the attempt to revive actual ancient 'pagan' religions. I think it's a matter of structures. Contemporary Paganism, as I am aware of it, is run on an essentially Wiccan model. That is a 'magic circle' model of 'casting the circle' the Four Elements, and a paired Deity(ies) in the middle. This format generally remains the same across Wiccan and Wiccan-inspired Pagan groups but can be "ethnically different" by swapping the deities around for those of different cultures - using Egyptian deities, Greek deities etc, but in the same 'magic circle' format. You can also combine deities/beings from several cultures in the one ritual format. A lot of people think that this 'magic circle' model *is* the "authentic ancient Pagan way of religious ritual" which under Christianity came to be thought of as "magic" but is "really ancient Pagan religion". When it is not actually ancient Pagan religion at all, but a *magic circle*, derived, I think, from the legacy of the Hermetic Order of the Golden Dawn on 20th century Wicca, Paganism and other types of Ceremonial Magic. I think that the Wiccan format is essentially the Lesser Banishing Ritual of the Pentagram extended into a religious ritual. It makes sense that Wiccans would be doing the "magic circle" format, because they are essentially Witches doing magic. But for "Pagans" to be also doing the "magic circle" format is less understandable, unless they are the types of "Pagans" who want to be Wiccans (rather than the types of Pagans who want to be non-Wiccan Pagans). Not that I'm saying that modern Paganism is not Paganism, I think it is, but it is a different thing to ancient, and to Reconstructionist, Paganism.

There is a prevalent idea that "Pagans" are "uninitiated Wiccans" which probably derives from the fact that Wiccans were/are the most active in the 20th century Pagan revival (maybe). Anyway, there is an idea that "Pagans" are un-initiated Wiccans, that they are a pool of potential Wiccans and that Wiccans are the "clergy" of this pool of Pagans. Wiccans have higher status in this situation. If the Pagans want to, they can try and join this clergy. Again, it seems to be a general belief that "ancient mystery cults" were part of all ancient paganism (when as far as I know while they were prevalent in Greece, and later Rome, they weren't evident across the board of "ancient Paganism" and the idea that they were characteristic of Egyptian religion is completely wrong) and that the Wiccan initiation is a form of one of these "ancient mystery cults" - among other things. In a (modern) Pagan festival situation it could be *generally* looked at like a "Sabbat" is a big public festival that brings together all sorts of Pagans, you don't have to be an initiated Wiccan to attend. An "Esbat" could be more of a Wiccan-focused event for those who are intending to eventually become initiated, or who are already initiated. Then there might, well there will be, initiates-only rituals that are not public at all, but coven only. So a permanent membership in the mystery cult/clergy. It's three a concentric circles of types of participation, from "Pagans" on the outer, to initiated Wiccans on the inner. But all using the same "magic circle" format. That's just a general diagram that isn't necessarily concretely representative of exactly how Pagans/Wiccans work, but from my experience it seems generally right.

Reconstructionist Pagans are a completely different kettle of fish to Neo-Pagans and/or Wiccans. They research the ancient "pagan" religion(s) of their choice and then attempt to practice it. It usually looks, and is, nothing like Neo-Paganism or Wicca - because it is not about magic, is not designed on a 'magic circle' structure. Nor is it "earth-based" necessarily. Sure, some of the gods, or beliefs or practices are earth-oriented, but others aren't, they are sky-oriented, or culture-oriented. In ancient Rome for example, "magic" was a pejorative label. The Roman magistrates and Flamens, or the Vestal Virgins, were not "doing magic", that wasn't their intention, although from our point of view they might look like they were (probably because Christianity viewed other religions as magical or demonic), but Romans would have been insulted to have been thought of as doing magic when they were trying to perform civic religion. Although of course magic went on, privately. Reconstructionists don't do much in the way of "ancient mystery cults" either, because of a lack of good information on *exactly* what went on - because the ancients were so good at keeping secrets, except for ancient Christian converts who liked to blab. (Although I am more sympathetic to the idea of Recons just doing mysteries anyway, sans good info, just do the best you can - I suppose that's an example of *degrees* of historical correctness).

So... Basically Wicca/Witchcraft and Neo-Paganism are similar to each other, because they both use the 'magic circle' format for their religious/magickal space (and I think Neo-Paganism derived from Wicca, and from where Wicca derived itself from - which was the Golden Dawn) but are they are both very different to ancient "paganism" and forms of Reconstructionist Paganism. I think it is important to distinguish between modern Wiccan-Paganism and ancient pagan religions. And magic of all sorts. I also think that modern Pagans could make a bit more effort to research what they purport to be practising *or* alternatively stop claiming ancient precedents.
Posted by Caroline Tully at 3:47 AM 9 comments: 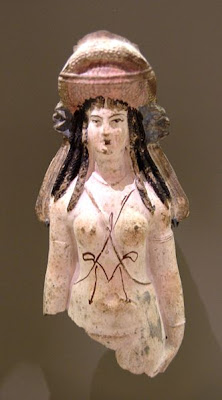 The Hellenised Egyptian cult of Isis originated in Ptolemaic Alexandria from whence it spread out into the Mediteranean. By the 4th century BCE there was an Isiac sanctuary in the Piraeus (Athens' port). During the 3rd until the 1st centuries BCE the Isiac cults practised at Greek trade centres such as Alexandria, Delos and Puteoli spread along sea-trade routes. Delos, a major slave trading emporium, was the main site of Isis worship. From the 2nd century until the sack of Delos in 88 BCE there was uninterrupted contact between the island and Puteoli, the second international Mediterranean port after Delos. By 105 BCE there was a temple of Alexandrian divinities at Puteoli and, more widely, in Campania, at Pompeii, Herculaneum, Stabiae and Naples. Within about five more years it would be in Rome. While there existed a tradition of rather refined sculptures of a Hellenised Isis, based on the iconography of deified Ptolemaic queens, there were also these very cute terracotta popular images of the goddess in her form in which she was syncretised with Hathor-Aphrodite. I've been collecting images of them because I think they are so cute.
Posted by Caroline Tully at 4:43 AM 3 comments: