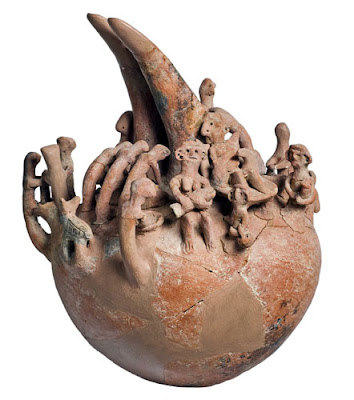 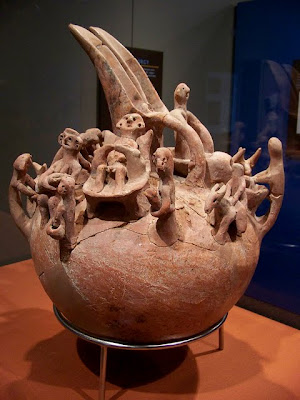 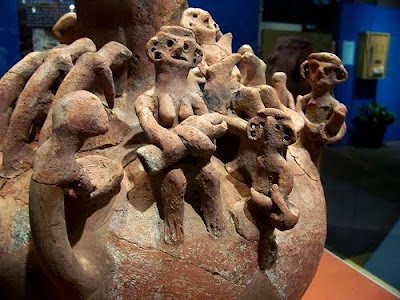 How cute is this Early Bronze Age red polished jug with figural decoration from Pyrgos? Yes, it is indeed cute. Ancient Cyprus seems to have a lot of cute ceramic objects. A while ago I posted a really cute little model shrine which is a perfect example of such things. The ceramic featured above is part of an exhibition of Cypriot objects that is being held at the National Museum of Natural History, part of the Smithsonian Institution in Washington, DC, up until May 2011. So all you Americans can go see it much easier than I can. There are 200 artefacts on display in this exhibition, including this jug. When I first saw it, on the cover of the CAARI newsletter, I thought the projecing "spikes" were intended to evoke bovine horns - which may very well be correct - but as you can see in the second image, those horns are pouring spouts. This does not preclude simultaneously being "horns". I must admit that I don't know much about this object and can only speculate that it is some sort of ritual libation tool or offering. Here's a little article here, the jug certainly seems to feature a lot in the promotion of the exhibition. So, happy viewing.
Posted by Caroline Tully at 12:52 AM 7 comments: 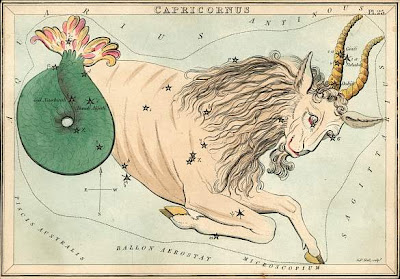 For readers who would like to obtain their own Sidereal Horoscope to compare with their Tropical, Western chart, I suggest that if you know your planet’s positions, just subtract 23 degrees from each position, which will often cause a planet to regress into its previous sign, or buy an Ephemeris which is a book with the Tropical positions of the planets in the signs and then subtract the 23 degrees, or find an Astrologer who calculates Sidereal charts. Some Western Astrologers have adopted the Sidereal Zodiac method, however it is usually thought of as an esoteric practice in a Western context.
Posted by Caroline Tully at 9:17 PM 2 comments: 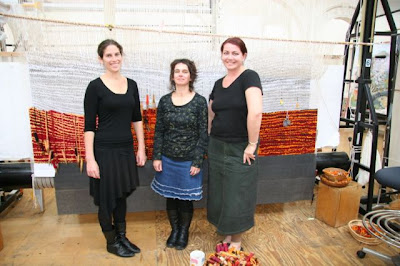 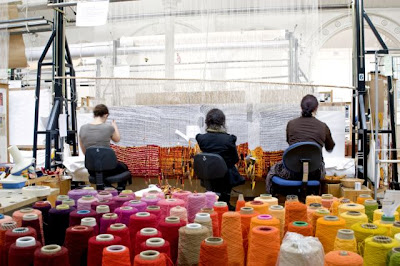 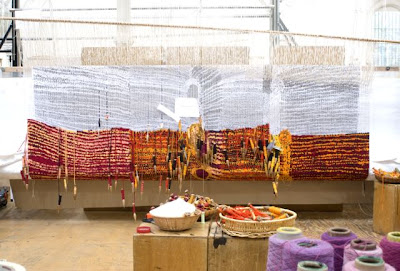 I worked as a Gobelin style tapestry weaver at the Australian Tapestry Workshop for 14 years where we used haute lisse looms to create mural sized, as well as domestic, small and even miniature woven tapestries. I started in 1996, just after I graduated from a Bachelor of Arts in Fine Art from Monash University, had a year off in 2000 for Maternity Leave, and then worked up until early 2010 after which I left to do a full time PhD in Aegean Archaeology at the University of Melbourne. During my time at the Workshop I worked in collaboration with artists and other weavers, and sometimes alone, on many projects. The above pics are of Emma Sulzer, Louise King and myself when we were working on the Nyankulya Watson project. This was the second-last tapestry I worked on for the ATW. I've listed a pile of other projects that I did over the years here:

William Barak, Dancing scene of figures with boomerangs and people in possum skin cloaks in And Now Exploration and Settlement are Underway, Federation Tapestries, Melbourne Museum. 2001.