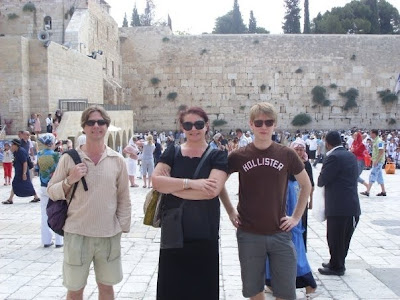 Last year I spent the first half of the year scrimping, saving and scrounging money to attend an archaeological dig at tell es-Safi/Gath in Israel. Part of my trip was funded by a scholarship from the Biblical Archaeology Society, publishers of the magazine Biblical Archaeology Review. I had to write a report on my dig experiences and it has recently been published in the online version of the magazine. The above pic shows myself with co-students Jason and Dean in Jerusalem before we got to the dig, hence clean. See two dig pictures in the article.
Posted by Caroline Tully at 2:52 AM 2 comments: 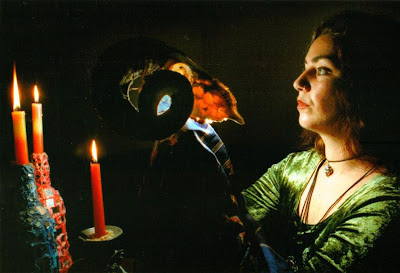 Me in a green crushed velvet dress with a ram skull. Green is the theme colour for my Edenic PhD. The topic is green, the folders and notepads are green, I am green. Bright grassy green. (Like the Wicked Witch of the West's skin tone? Hopefully not). Over on Facebook, where comments tend to be rather fleeting because of the quick turnover, Peg Aloi commented about this blog post so I thought I'd include what she said here: "Nice! In my Color in Cinema class, the film we study for green is ATONEMENT. The gown's bright green color represents the lost romantic past; and after the pivotal scene where it is last seen, the color is never again seen in the film except in flashback or in battle/war scenes of the present." Then Jeffrey Winters commented below that "Hopefully you're studying the Green Fairy as well. Absinthe makes the tart grow fonder." I replied to these posts thus: "Wow, Peg, I like the idea of a green gown representing a lost romantic past, because that's pretty much what the photo of me in the green gown represents! And no Jeffrey, I'm not drinking the Green Fairy, at least not right this minute." I must say I'm not familiar with the film Atonement, better look that up.
Posted by Caroline Tully at 10:27 PM 2 comments: