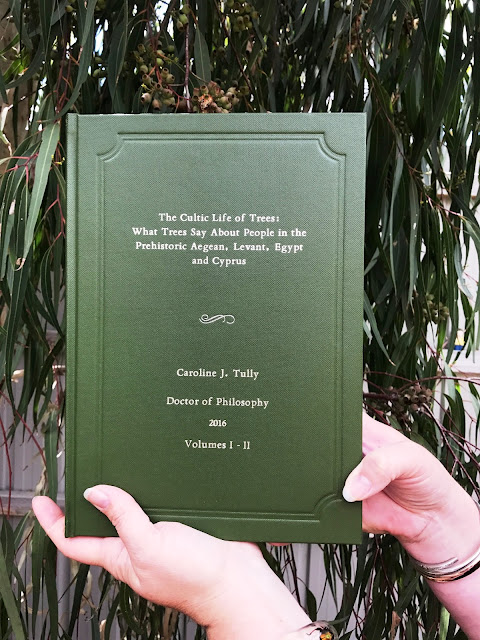 The Cultic Life of Trees: What Trees Say About People in the Prehistoric Aegean, Levant, Egypt and Cyprus
Posted by Caroline Tully at 5:25 PM 4 comments: 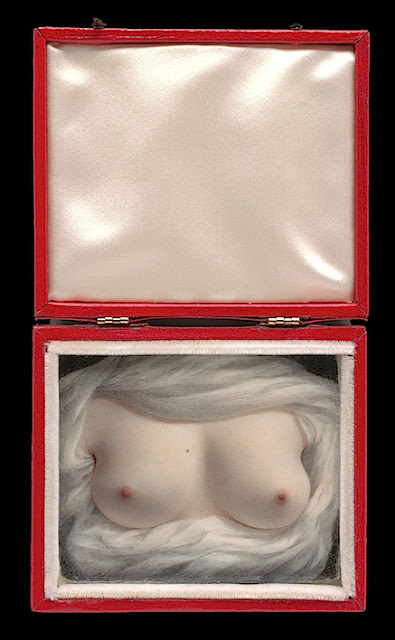 You think sexting is totally 21st century? Here's an example from 1828. It's a miniature painting by Sarah Goodridge, of her boobs, which she sent to the newly widowed statesman, Daniel Webster. The painting is tiny, measuring 6.7cm x 8cm, pretty much approximating the screen on a mobile phone. This, however, was painted on ivory and later set in a case. I think it's quite enchanting. It's very cute; to the uninitiated viewer the boobs would be anonymous, while the recipient of the portrait was aware of the owner's identity - it's really a kind of flashing. Beauty Revealed was painted when Sarah was about 40, and some critics have speculated that she enhanced her the appearance of her breasts so that they looked younger. (Is there nothing new under the sun? Imagine that, a woman enhancing her natural beauty!) Sarah must have been a rather forward woman for 1828 - and I applaud a woman of any era who takes seduction into her own hands. Men still want to see boob shots, according to Cosmopolitan magazine, but as a painting Beauty Revealed seems rather more precious and less disposable than the proliferation of photographic nudes all over the internet today.
Posted by Caroline Tully at 11:27 PM No comments: 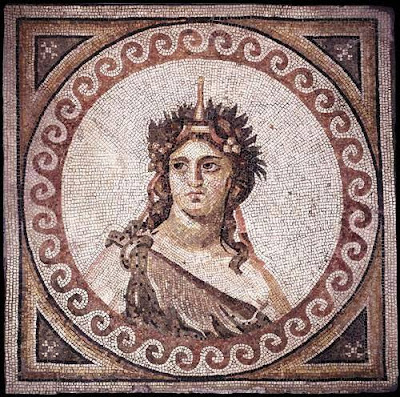 The Bacchic rites were initiatory mysteries of Dionysus, probably of south-Italian Greek origin, which were widespread in central and south Italy and which, by 186 BCE, had begun to trouble the Roman authorities (Livy. 39. 15). The Senate exercised control over the Bacchic rites by arresting and executing over six thousand practitioners and severely cramping the continuous activities of the cult through the promulgation of a decree, the senatus consultum de Bacchanalibus, regulating its organisation and activities.
According to Livy (39.8‒19) the Senate was motivated to do this because violations of morality and criminal practices occurred under the guise of the cult, however it is more likely that this was a propagandistic veneer covering the real reason which was that the Bacchanalian cult in Rome was unsanctioned and uncontrolled and hence threatened to disturb the social and religious structure and hierarchy of Roman society. Here I examine the two main textual sources concerning this event: the senatorial decree and Livy’s account (39.8‒19) and propose that the repression was more a matter of the control of people’s allegiance to Rome, its society and religion, than a case of the Bacchic cult’s essential immorality.
Livy tells us that the Bacchanalia was successfully repressed by a combination of extremely negative propaganda, arrests and executions of participants, and the outlawing of the cult in its original form. The negative propaganda involved painting the Bacchanalia as a hotbed of debauchery and crime which turned people against participants; it was also forbidden for anyone to harbor cult members, and informants against them were paid a reward. Over six thousand people were executed and all Bacchic shrines were destroyed except those containing an ancient altar or statue that had been consecrated.
The decree, which was passed after much of the violent repression had already taken place, provided the legal framework for the suppression. It imposed a set of regulations that made the Bacchic cult as it had existed illegal and made it difficult for it to continue except in the form of very small groups. The Senate did not ban the cult entirely, but strictly regulated its organization and activities, focusing on its structure and property and the status and number of participants.
Some aspects of the decree were subject to appeal to the Senate, such as the forbidding of the maintenance of places of Bacchic worship, attendance of meetings of Bacchic women by male citizens, and the performance of worship by a group larger than five persons. Others however were non-negotiable: men were forbidden to be priests of Bacchus, there were to be no chief administrative officers of the cult, no common fund, and members were not allowed to swear oaths to the cult. John North suggests that the whole procedure may have been designed specifically to make it impossible for any form of Bacchic worship to continue, while maintaining the appearance that it could do so with Senatorial permission.
According to Livy’s version of events, the reason why the Senate wanted to suppress the Bacchic cult was a moral one: it was a cover for coercive sexual and criminal activities including poisoning, murder, perjury, counterfeiting and forgery. It ‘feminised’ young men and interfered with their proper allegiance to the State, which it wanted to overthrow. Membership in the Bacchic cult was reputedly so large that it was practically already a ‘second people’. (John Scheid explains that young men were supposed to be presented to the state by taking the toga virilis under the watchful eyes of the oldest male relative. The Bacchic rites, where youths were being initiated by women, were therefore a topsy-turvy version of this).
Contrary to Livy’s explanation, Sarolta Takács argues that although Roman religion was inclusive, foreign deities were only legitimated when they received official acceptance by the ruling elite. Such is the case of the Phrygian goddess Cybele, brought to Rome eighteen years previously, whose inclusion was completely orchestrated from within the structures of Roman religion for the purpose of helping Rome. While the Romans incorporated certain specific aspects of Greek religion and ritual, which they subordinated to their own religious structure and aims, they did not want other features ‒ particularly those which they neither sanctioned nor controlled and whose religious activities did not contribute to Roman welfare.
By slandering the aims and content of the Bacchic rites, punishing participants, dismantling its group structure and making it illegal, the Senate exercised control over the Bacchanalia. Despite Livy’s assertion that the Senate’s objection to the cult was a moral one, it is more likely that the reason was because the Bacchanalia had a large, unsanctioned and potentially unruly membership with inconvenient social, cultural and political allegiances that threatened to disrupt Roman order.

Note: Specifically, the Bacchic rites were ‘mystic’: a relation of intense communion, typically ecstatic or enthusiastic, with the divinity, rather than ‘mysteries’ proper: as in entire initiatory structure of some duration and complexity as at Eleusis.

For more on Roman Religion, an article on the Vestal Virgins, see here:


Posted by Caroline Tully at 12:55 AM No comments: