What's religious about ancient Mediterranean religions? This is the theme of the Inaugural Meeting of the Society for Ancient Mediterranean Religion, held on June 28 2009, at the Pontifical Biblical Institute, Rome, Italy. And I'll be there! Wah-hoo!
At the inaugural meeting of the Society for Ancient Mediterranean Religions, we plan to begin our discussions by considering the ways in which the conceptual category 'religion' is applicable to the study of ancient cultures. Sacrifice, prayer, pilgrimage, private and public devotion, beliefs about gods and goddesses - all of these practices and ideas seem to fall safely enough within the category of 'religion'. A question worth thinking about, however, is whether the boundaries of this modern category - and indeed the category itself - match up with any patterns of practice or belief held by the people we hope to understand. In other words, what did it mean to be 'religious' in the ancient world? Perhaps behaviors that we might now call 'religious' are better understood as falling within the realm of political acts, or as practices that delineate certain tribal or familial identities. Matching up ancient and modern ideas about this cluster of ideas and practices promises to reveal significant mismatches in our conceptual lexica where religion ancient and modern is concerned. We hope that it will also give rise to useful reflections about this inter-disciplinary project that we have initiated: what different methodological presuppositions do students of ancient Mediterranean cultures bring to the study of religious phenomena and what do we stand to learn from each other?
Posted by Caroline Tully at 5:02 AM 4 comments: 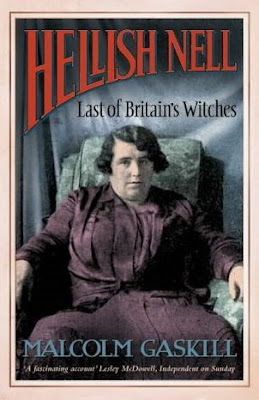 It turns out that Marina Warner did write that book on ectoplasm after all - in 2006. I just hadn't heard about it, which is the way of things, I mean I didn't realise there was a fourth book in J.M Auel's 'Clan of the Cave Bear' series until it had already been out for ages (and yes I have read it, and the fifth one too - but hey, is she ever going to write any more? I'm waiting!). Actually, Warner's book, which is called Phantasmagoria, is not just on ectoplasm, but explores angels, ghosts, fairies, revenants, and zombies as well. Not that I have actually read it, I have not - as yet - seeing as I only discovered its existence half an hour ago. Here, by the way, is a fascinating little essay by Warner in Cabinet Magazine about looking at Helen Duncan's (see picture above) ectoplasm, although now I'm confused because at the bottom it says "Marina Warner's most recent book is Signs & Wonders: Essays on Literature and Culture (2003). She is currently finishing a study of spirit images, Figuring the Soul about waxworks, fata morgana, and ectoplasm." - maybe that's an entirely different book from the Phantasmagoria one. Whatever. I can't keep up and [come closer, while I whisper] frankly, while I do own about four or so Marina Warner books, and have all good intentions of reading them, last time I tried I found her too difficult to actually read. However, I haven't tried them for several years, I may find that I can read them now. Anyway, I like the types of topics she covers, and I admire her obvious braininess. But regarding Spiritualism, perhaps it is easier to actually read Alex Owen's 'The Darkened Room: Women, Power and Spiritualism in Late Victorian England'. Janet Oppenheim's 'The Otherworld: Spiritualism and Psychical Research in England, 1850-1914.' is the most famous book on Spiritualism, possibly being eclipsed now by more recent publications. (A quick Google search turns up that Oppenheim died in 1994! I see... another thing I didn't know - can't know everything, I suppose). Other interesting books on the topic of Spiritualism and the history of Psychical Research are Deborah Blum's 'Ghost Hunters', Mary Roach's 'Spook' - which is quite humorous - and for a specifically Melbourne flavour: Alfred Gabay's 'Messages from Beyond: Spiritualism and Spiritualists in Melbourne's Golden Age.'
Posted by Caroline Tully at 3:44 AM No comments: