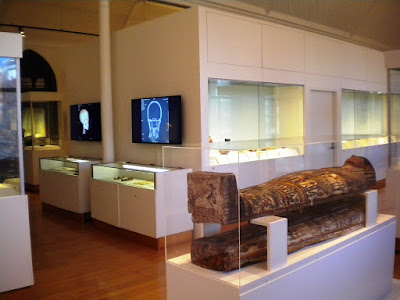 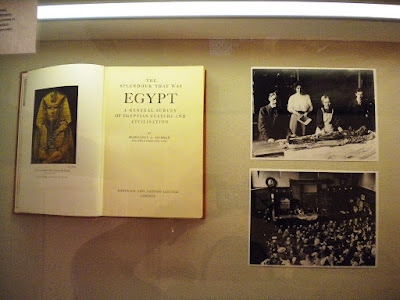 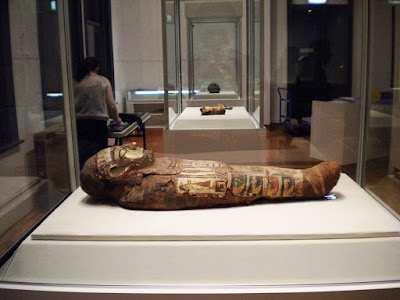 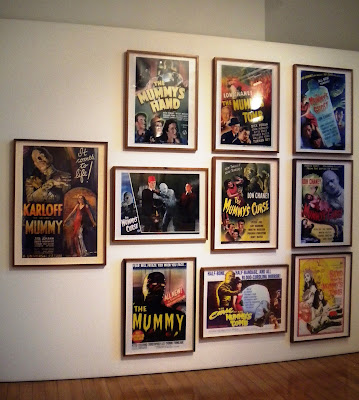 Hooray! After months of preparation, the Mummymania exhibition that I worked on as a researcher and curatorial assistant - under curator Dr Andrew Jamieson – is ready to view in the Classics and Archaeology Gallery at the Ian Potter Museum of Art, University of Melbourne, Parkville.

Mummymania focuses on the role of the ancient Egyptian mummy within the themes of life, death, resurrection and immortality as well as the changing perception of the mummy over time. The mummy has a long history in both ancient and popular culture, from its original role in ancient Egyptian funerary practices to its importance in early scientific investigations into ancient disease and medicine, and its popular reception as a malevolent Hollywood monster-figure.

The word ‘mummy’ derives from the Persian word mummia meaning bitumen, long considered a medicine in the Near East. Bitumen resembles the dark resinous coating on Egyptian mummies which, along with mummified flesh itself, was prized for medicinal purposes and by the sixteenth century was a highly sought after drug in Western Europe. With the beginning of the serious collection of antiquities in the sixteenth century, whole and partial mummies were included in cabinets of curiosities. Adventurers and diplomats brought back entire mummies along with amulets, scarabs and papyri. After the French and British military campaigns in Egypt (1798–1801) enthusiasm for all things Egyptian became widespread, particularly in the nineteenth century taste, although the mummy is still in demand today by practitioners of magic and the occult.

Public mummy-unrolling spectacles were popular from the sixteenth up to the early twentieth centuries. Egyptologist, Margaret Murray, perhaps better known for her popular books on Witchcraft, even unrolled a mummy in front of a crowd of five hundred people at the University of Manchester in 1908. Beginning in the mid-1970s, non-invasive methods of investigation began to be used in the examination of mummies in order to study ancient disease. Alongside the increased understanding of mummies through scientific methods of investigation, the mummy in popular culture remains a figure of menace as is evident in mummy horror films.

Posted by Caroline Tully at 6:21 PM No comments: