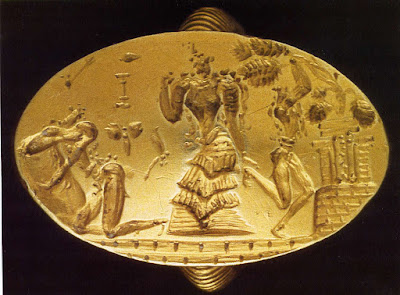 I’ve got a new publication, first one for 2021: ‘Traces of places: sacred sites in miniature on Minoan gold rings.’ Here's the abstract:

Sacred sites in Minoan Crete are known from both archaeological remains and iconography. Glyptic art is the most extensive body of Aegean Bronze Age representational art and consists of carved seals in the form of engraved metal signet rings, stone seals, and the clay impressions (sealings) that these were used to produce. Gold signet rings from the Cretan Neopalatial period (1750– 1490 BCE) depict various types of sacred sites, including mountain, rural, cave, and urban sanctuaries. How should we understand the built structures depicted in these miniature cult scenes? Do they all depict variations of walls or buildings, or are they altars? This chapter differentiates the built structures depicted in cult scenes on Minoan gold rings, correlates them to archaeological remains at Minoan sacred sites, and proposes an explanation of ephemeral cult structures now only recorded in the iconographic evidence. It will be demonstrated that these miniature art forms represent Minoan sacred sites in three ways: as natural places characterised by the presence of trees and stones and the absence of architecture; as outdoor sanctuaries surrounded by ashlar stone walls; and as shrines and altars, the shapes of which evoke natural cult locations such as mountains and sacred groves through abstract form. It will be argued that representation of Minoan cult structures that evoked the natural landscape within prestigious art forms was a method whereby Neopalatial elites naturalised their authority by depicting themselves in special relationship with the animate landscape.

Posted by Caroline Tully at 3:23 AM No comments: 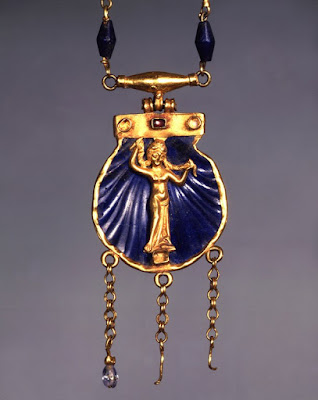 Magical Gems and Jewelry for Healing, Honoring Deity, and Astrology

Witches regularly wear occult jewelry: pentagram pendants, amber, jet, moonstone, coral, or even acorn necklaces; magical rings with special stones or symbolic designs; and lots of silver, the metal of the moon. Wearing jewelry is a form of communication: to the wearer, to other people, and to hidden forces attracted by certain colors, substances and patterns.

Join Caroline Tully in a workshop that includes:

Magical gems and jewelry from ancient Egypt, Greece and Rome

Gemstones in relation to Ancient healing modalities and gods

Learn about the stone amulets, empowering talismans, and protective jewelry of the Ancient World, and the spells used to activate them. Through discussion and practical ritual, contemporary approaches to healing magic will be revealed. Bring a piece of your own jewelry and through ritual we will draw down the stars to consecrate it to a healing deity.

This workshop will be held at WitchCon

According to Goddess-Feminist history, the Great Goddess was the original, and only, deity of humankind from the dawn of time up until around 3000 BCE, when Goddess-oriented cultures were conquered by patriarchal, warlike worshippers of a sky god. Late Bronze Age Minoan Crete (1750–1490 BCE) is considered to be the Goddess culture’s final flowering, believed to exhibit the last gasp of the feminine values associated with Goddess culture before it was wiped out by warlike, patriarchal Mycenaean Greeks. Before this time Minoan Crete was peaceful, worshipped the Great Goddess and her Dying and Rising Consort (who was also her son), and women and nature were respected. Join Dr Caroline Tully in a workshop on ancient Minoan religion, focussing on the Snake Goddess. Find out about the claim that on Crete the snake appears in the worship of the female deity more repeatedly than anywhere else in the Mediterranean. Focus will be on ancient artifacts that depict female figures holding snakes in their hands or with them coiled about their bodies, suggesting that they were an integral part of the religious rituals. There will also be a practical component on methods to achieve altered states of consciousness using techniques you can take away and practise at home.

Caroline Tully is interested in the practical side of magic and has been a modern Witch since 1985. She has written for many Pagan and occult publications and was a feature writer for Australia’s Witchcraft Magazine for six years. Caroline is also an archaeologist who studies ancient Mediterranean Pagan religions as well as their manifestation in the modern world. She has many areas of interest including ancient religions, the Hermetic Order of the Golden Dawn, Thelema and contemporary Paganisms, particularly Witchcraft and Pagan Reconstructionism. Caroline is an expert on tree worship in the Bronze Age Aegean, Levant, Egypt and Cyprus, and has strong interests in the Environmental Humanities, nature, landscape, animism, ecology, ecofeminism, the Anthropocene, and posthumanism.

Posted by Caroline Tully at 4:35 PM No comments: