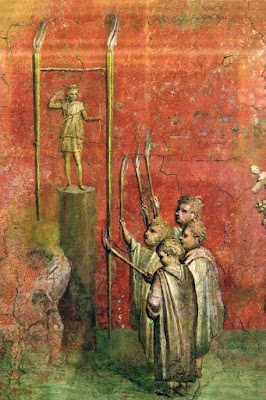 I have given birth twice, but I only have one living child. Before going through the process myself, I had assumed that pregnancy and birth were uncomplicated Goddess-given activities that women just “did”. I’d read all about Great Mother Goddesses, fertility cults, and women’s mysteries – and lots of my friend had children – so surely reproduction was as easy as falling off a log.

Jasper was conceived sometime near Yule 1999 and was born two weeks before Mabon 2000. Being our first child, we were pretty excited, so we marked the stages of his gestation at each of our Sabbat rites. The pregnancy seemed to be progressing along fine and I planned to have a natural birth at a nearby hospital. The day before my due date, however, I was diagnosed with preeclampsia – high blood pressure, swollen feet and hands, and protein in the urine. This meant the end of the “natural” birth. Labour was induced immediately. I recall during the labour just hoping I would get through the process alive and in the end, after a forceps delivery, I was lucky enough to be presented with a chubby, healthy baby boy.

But the drama didn’t stop there! Next my uterus refused to contract, so the midwives literally had to pummel it, expelling lots of clotted blood each time, until it started to shrink. The midwives estimated that I lost 1.6 litres of blood at delivery, which apparently is quite a lot (the human body contains 5.6 litres). In my rather dazed state, it began to dawn on me just how easy it would be to die giving birth. My blood pressure, which had been skyrocketing during labour, now became dangerously low, and as the nurses bustled around trying to revive me with oxygen, I mentally withdrew into myself – I’d really had enough of the whole birthing thing by that point. It was during this weird time that I had a vision of the goddess kali, the Hindu Goddess of death and destruction.

Kali appeared in vivid Technicolour, rather like a slide image projected on the far wall of the delivery room. Adorned with a skirt of severed arms, a necklace of freshly cut heads, earrings made from children’s corpses, and wearing serpentine bracelets, she was dancing at the end of the world under a blood-red sky. This was hardly the nurturing, fecund image of deity that I associated with childbirth, but then my labour had not exactly been straightforward and assured of success. Two of Kali’s four arms held a sword and a severed head, while the other two made the gestures of dispelling fear and offering boons – was she going to behead me or grant me life?

Without speaking, the Goddess conveyed an understanding about blood equalling life – the bloody uterine chalice, the precious liquid passed from parent to child, the river of generation spewing out of the cosmic cauldron, the potent elixir of perpetuity – I was a link in the chain of existence, a bead on the necklace of rebirth, and a skull adorning Kali’s gruesome garland. I saw my body as a vessel: I had given lifeblood, provided nourishment, and enabled new being to incarnate. Kali showed me death but granted me life.

After the birth drama was over and I lay in the hospital bed with my new baby, the Goddess Artemis appeared. Hovering transparently in midair, she oscillated back and forth between her human guise and the form of a big brown bear.  Wordlessly, she expressed her nature as being the one who grants or withholds success in childbirth, the Goddess who allows mothers to live but who also kills them. I suppose she had come to see the result of letting me live, making sure I knew who to thank. I was aware that in the ancient world. One of Artemis’s roles was to oversee the transition from girlhood to motherhood and although I was far from being a young girl, I as nevertheless going through a rite of passage specifically sacred to her. I was both bemused and pleased to be having another Goddess epiphany.

I became pregnant with my second baby around Lammas 2002.  I felt very clever and mused about being an alchemical instrument mixing male and female essences together to create something new – I was the curcubit! The first two months were characterised by a vile morning sickness, but after the beginning of the third month the nausea stopped and not long afterward I thought I detected movement – always comforting to a pregnant woman – but no sooner had I started to expect the movement than it seemed to stop.

My confidence waned, but I put it down to paranoia. One night, however, I had a vivid nightmare: In the dream, I went into the bathroom and, after going to the toilet, I began pulling on a large red membrane, which seemed to be emerging from my vagina. It came right out and panicking, I called my partner. He held up the sheet-like membrane and turned it around; as he did so we saw that stuck to the other side was a little white skeleton. My heart sank, this was an ill omen for sure. After waking, I chose to ignore the dream, but an apparent lack of foetal movement did bug me.

At almost five month’s gestation, I noticed an extremely heavy secretion of mucous, which is not entirely unusual in pregnancy, but this seemed abnormal. At my next hospital appointment, I was assured that there was nothing to worry about, but I still felt concerned. The midwife also had trouble finding the foetal heartbeat, eventually detecting it very low down on my abdomen, which seemed strange to me. She didn’t think it was a problem, however, and after talking with her for a while I was reassured that the baby was alive and the heartbeat sounded normal. I went home feeling slightly more confident.

The next day I planned to do some leisurely book reading. In the past few weeks, I had developed an intense interest in Goddess figurines from Ice Age art, specifically the Venus of Willendorf, who had started to appear to me regularly in visions, and I hoped that this might indicate some sort of connection or favour that boded well for my pregnancy. I intended spending the day looking at photographs of various figurines, gazing at and meditating on their ample forms. Before getting down to it, I took a toilet break, and it was then that I felt a strange pressure in my pelvic floor. Just on a whim, I stood up and inserted one finger into my vagina – imagine my horror when I actually felt something bulging downwards from my uterus. I checked again, confirming my worst fears, something was definitely wrong, so my partner and I rushed to the hospital.

My cervix was dilating and I would miscarry unless I had a cervical stitch. All that mucous had been the cervical plug that keeps the womb sterile during pregnancy – it had fallen out. There was a chance that a cervical stitch, like a drawstring, might hold the womb closed, but it wasn’t guaranteed. If the cervix continued to open, I would have to give birth to a baby who would die. (My baby was only twenty weeks old; the earliest a premature baby can be saved is twenty-three weeks). For the rest of the night I lay prone on the bed, hoping fervently that my cervix would stay shut.

A morning ultrasound revealed that the baby was descending into the birth canal; it was too late for the stitch. The worst part was that he was alive, vigorous and perfectly healthy, but didn’t stand a chance outside the womb. I was grief-stricken: it was so unjust, so wrong. I felt totally abandoned by the Goddess. Was this some sort of horrible punishment? Hadn’t I appreciated the gift of pregnancy enough? There was no alternative but to push him out. It didn’t take long, a few strenuous pushes and I felt a jellylike mass emerge from my vagina. I knew it was the baby in his amniotic bag, but I felt like I had given birth to a frog, a bird, or a bat. He was a lovely looking baby, but he died after about half an hour. We didn’t name him, it just didn’t seem appropriate at the time.

I felt cheated, robbed, bitter, bewildered, and sadder than I have ever been – definitely the worst experience in my life.

For the next two months I was desperate to begin another pregnancy. Then, all of a sudden, the motherhood hormones dried up, disappeared, and a new strange “me” emerged. Cynical and morbid, I immersed myself in thoughts about the Underworld, spiritualism, poison, murder, and black magic. I was furious at the Venus of Willendorf – she could go to Tartarus!!! Who did she think she was, appearing to me in the weeks before my miscarriage like that? Why had she been hovering semi-transparently in front of my eyes all that time? Wasn’t she supposed to help pregnant women? Why had she been so awful to me?

As time passed, I began to realise that perhaps I simply had not read the signs properly: I hadn’t sought to clarify my apparent rapport with the Venus via divination, to get another angle on what her appearances possibly meant, and had blithely coasted along, believing that she was a benevolent manifestation of the Great Mother. I now realise that I had been relying on popular assumptions about what this particular Ice Age figurine actually represents, when in fact we don’t really know much about her at all. We don’t know whether she was a Mother Goddess, a fertility idol, or an Ice Age pin-up girl – she may even have had something to do with limiting fertility because historically hunter-gatherer groups have been more concerned with keeping their population down to a level that their environment could support, rather than increasing their numbers exponentially. Whatever she is, I should probably have realised from my previous experiences with the liminal Goddesses, Kali and Artemis, that deities can take as well as give. If the Venus is a great Mother, maybe she was taking the baby back, facilitating a reverse birth into the world of the spirit? I am reconciled with her now and, in hindsight, I think she was doing me a favour.

Posted by Caroline Tully at 1:10 AM 2 comments: