Florence Farr, the Mummy, and Me 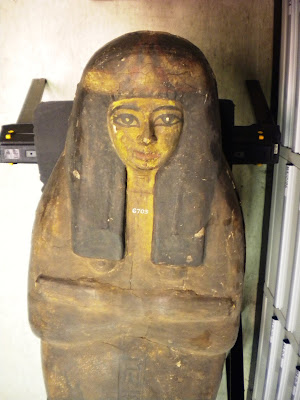 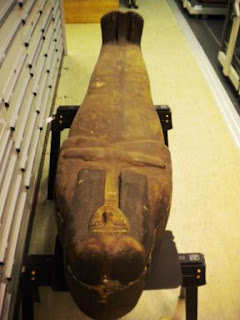 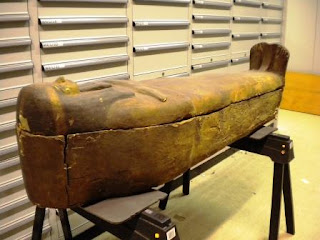 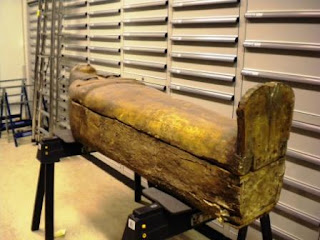 Florence Farr was initiated into the Hermetic Order of the Golden Dawn in 1892 and attained a position of national leadership by 1897. As a successful Golden Dawn initiate it was to be expected that Farr would become fascinated by Egyptian religion, considering the large part it played in Golden Dawn ceremonies, as well as Egypt’s ubiquitous presence in Late Victorian London exhibitions. In addition to assuming responsibility for the entire order in Britain, Farr composed and performed complex rituals to Egyptian deities, lectured publicly on Egyptological subjects, wrote two Egyptianising plays and after resigning from the Golden Dawn in 1902, was conducting her own ‘Egyptian’ initiations by 1903. Like MacGregor Mathers, Farr utilised the British Museum as a place for both artistic inspiration and study. It was while researching material for her book, Egyptian Magic, in the British Museum in 1895 that Farr ‘made contact’ with what she described as ‘an Egyptian Adept’.

The identity of Farr’s ‘Egyptian Adept’ is contested. On the one hand, friends of hers to whom she left a wooden ‘shrine’ in which an Egyptian being allegedly dwelt claim that its name was Nemkheftka whereas on the other hand, eye-witnesses report that the name of the entity was Mut-em-menu. Either way, this ‘Adept’ was a long-dead ancient Egyptian that Florence obviously felt perfectly comfortable about ‘speaking’ with. The idea that one could converse with the dead was a staple of Victorian Spiritualism and it was a cornerstone of the Hermeticism that imbued the Golden Dawn that all knowledge is obtained through revelation, not reason. Ancient Egyptians had a habit of manifesting themselves to kindred spirits in the 1890s and even London journalists reviewing Late Victorian exhibits of Egyptian antiquities were liable to ‘reanimate and evoke the people of the past in a quasi-psychic way... as if through a medium.’ Consequently it was not at all unusual for Farr to believe that she could receive information through a discarnate entity she met in the British Museum.

Both Nemkheftka and Mut-em-menu were (and are) part of the Egyptian collection in the British Museum. Nemkheftka – actually Nenkheftka – is a painted limestone statue of a provincial official from Deshasha, dating to the 5th Dynasty, around 2400 BCE, at the height of the Old Kingdom. The statue was acquired by the British Museum in 1897, so ‘Nemkheftka’ could not have been the ‘personality’ Florence was in contact with in 1895, although it seems that he did fulfil that role after 1901. ‘Mut-em-menu’, a coffined mummy acquired by the British Museum in 1835, is a likelier candidate for Farr’s ‘Egyptian Adept’ at this time. Like other museum attendees, Farr would have been under the impression that Mutemmenu was ‘a lady of the college of the God Amen-Ra at Thebes’, however we now know that this description is only half correct. While the coffin is indeed that of Mutemmenu, a Chantress of Amun, dating from the 19th (1295-1186 BCE) or 20th (1186-1069 BCE) Dynasties, the mummy in the coffin dates from the Roman period (30 BCE – 395 CE) and is actually that of a man whose wrappings are padded and swathed so as to imitate feminine features such as breasts and rounded thighs. (According to X-rays taken in the 1960s. The mummy was most likely paired with this coffin by an Egyptian antiquities dealer, according to the Catalogue of Egyptian Antiquities in the British Museum. I: Mummies and Human Remains. Warren R. Dawson and P.H.K Gray, P.H.K. London: Trustees of the British Museum, 1968. xii).

It is understandable that in the 1890s this mummy would be taken at face value to have been female and Farr obviously deemed Mutemmenu a satisfactory link with the authentic Egyptian past. Fellow Golden Dawn member, William Butler Yeats, re-created Florence’s British Museum experiences in his unfinished novel The Speckled Bird where the hero, Michael Hearne (Yeats), accompanied by Maclagan (Mathers), was to meet a certain woman at the Britsh Museum who is later discovered meditating ‘with her eyes half closed on a seat close to the Mut-em-menu mummy case.’ She is not to be disturbed because, according to Maclagan, ‘she is doubtless conversing with Mut-em-menu’ who was, among other things, describing Farr’s past incarnations. Florence went to Paris in 1896 to confer with Mathers about her ‘Egyptian Adept’, a drawing of whom she had previously sent him. Mathers agreed that because the Egyptian had responded appropriately to signs that Florence had shown her, she was indeed ‘one of the 8˚=3˚’, making her one of the ‘Secret Chiefs’. He subsequently gave permission for Farr to form a group with higher degree members of the Golden Dawn to ‘work with’ the Egyptian.

For further information on Florence Farr, the Hermetic Order of the Golden Dawn, Egyptology and Mummies see my articles here (which is more recent) and here (dating to several years ago).

As I have mentioned previously on this blog, the online catalogue of the British Museum shows images of the mummy associated with Mutemmenu’s coffin, but not the coffin itself.

When I was in London in 2012, where I had appointments at the British Museum to look at Cypriot cylinder seals featuring images of tree cult and a Cypriot bronze cult stand also with images of tree cult, I was fortunately able to view Mutemmenu’s coffin. I hadn’t actually planned to see this coffin, but whilst happening to discuss it with one of the curators in the Department of Greek and Roman Antiquities (which was where the Cypriot material was) the curator suddenly offered to contact the Department of Egyptian Antiquities for me and see if I could get an appointment to view the coffin. Usually you’d need to book several weeks ahead however after a quick phone call I was able to get an appointment for the end of the week. When the time came I was able to view the coffin in the fascinating organic material store, the staff there having gotten it out of its storage shelf and placed it upon folding wooden legs so I could walk all the way around it as well as look underneath it.

The Department is happy for what they see as sincere researchers making having access to the collection, and it is generally not hard to make appointments to view material in the British Museum’s study rooms. The Egyptian Antiquities curator I that was dealing with did say however, that they were not too happy when a girl made an appointment and just came and sat in the store with her eyes closed, apparently just ‘feeling the vibe’ (maybe she was channeling Florence Farr?). Perhaps, if you wanted to do such things, it would depend on whether you explained yourself sufficiently to the Department as to why you needed to do it in the store (and it sounds like they’d probably say no), or else perhaps concentrated on the mummies and artefacts that are already on public display. However, we need to remember that (unfortunately) it’s not the 1890s any more so you might find yourself being moved along by the guards (unless you were pretending to draw artefacts… or perhaps got the British Pagan group, Honoring the Ancient Dead, to organise one of their Pagan access appointments?).