I'm presenting at the 2021 American Academy of Religion 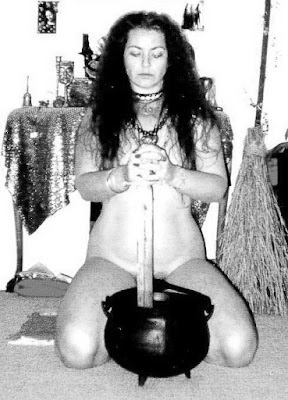 I'm presenting at the American Academy of Religion Annual Meeting, in the Theory and Method in the Study of Religion, Attire, and Adornment session on Sunday November 21st, 5.00 - 6.30pm (CST). This is what my paper will be about:

The Ordo Templi Orientis, Wicca, and the Church of Satan are three new religious movements that are part of the occultist stream of Western esotericism. Female nudity features prominently in their most important rituals. Priestesses disrobe in order to represent incarnate goddesses and become objects of worship. While unclothed in these rituals, the priestesses are not undressed; various supplements to the body are incorporated in their ritual costume such as veils, belts, jewellery and tiaras, and objects are held and carried. The adorned female body of the priestess situated within the ritual mise en scène is laden with symbolism and functions as a visual didactic assemblage that communicates essential tenets of the religions. Theories of glamour are used as investigatory lenses to examine the effects on ritual participants, and the wider public, of the occult priestess’s nudity-as-dress. The priestesses’ glamour is a form of powerful magic that enchants the viewer and an empowering feminist reclamation of the body as the locus of an immanent deity, simultaneously juxtaposed with the phenomenon of the glamour girl or pin-up and the objectification of women.

I'm also on a panel on 'Magic and Museums: Scholars and Practitioners' chaired by Amy Hale in the Contemporary Pagan Studies Unit at the American Academy of Religion annual meeting, Monday 22 Nov, 9:00-11:00am (CST).

Posted by Caroline Tully at 11:34 PM No comments: 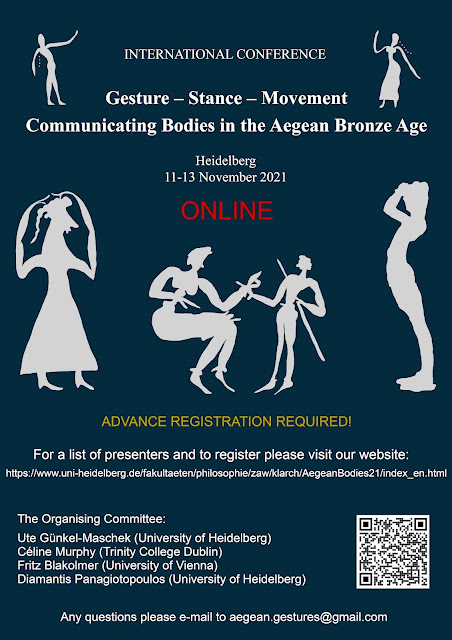 I’m presenting at the Aegean Gestures conference on Saturday November 13th. This is what my paper will be about:

Minoan gold signet rings are well-known for their depiction of ritual events. Thirty-one ring images depict ritual scenes in which human figures interact with trees. The majority of figures approach the trees in a calm and seemingly reverential manner; however, eight examples depict the ritual participant clasping and vigorously shaking the tree. These appear on gold rings from Knossos, Archanes, Kalyvia, and Poros on Crete (LM IB-III); Vapheio and Mycenae on mainland Greece (LH II-III); as well as an unprovenienced stone seal in New York. The figures all display a particular body posture: standing with bent knees, sometimes bearing their weight on one leg at the front, while their back leg is both extended and supplying thrust, or kicked back and upwards. The pose is suggestive of active movement and is also seen in glyptic depictions of agonistic scenes such as warrior combat, boxing, weapon use, men in combat with real and supernatural animals, bull-leaping, running, men striding with captured women in tow, and hybrid figures such as Minotaurs, bird-men and -women. These iconographic parallels suggest that the tree-pulling pose indicates a coercive or even violent activity. These scenes may depict the attempt to ritually control the natural world through aggression and domination, and to promote the idea that the elite owners of the rings were supremely capable of establishing and maintaining order.

Posted by Caroline Tully at 4:52 PM No comments: