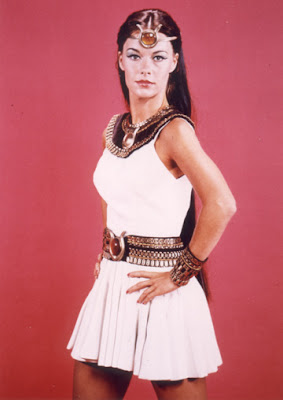 I haven't been able to update my blog - not that I'm a very frequent blogger anyway - because I have been FLAT OUT doing nine tutorials per week in first year Ancient Egypt and Mesopotamia. Not only do I take nine hours of tutorials, I have to correct Two Lots of 1000 word essays from all those tutes. Plus assess class presentations. (Ha ha, my friend Jason is tag-teaming me to correct the next lot of assessment. Wonder if I'll get roped into that as well?) I think I've marked more than 140 essays so far, and there's still more to do. I quite like marking, because it seems like editing to me. However, such an enormous load starts to make one occasionally nauseous - unless one has sufficent rest from it occasionally, like daring to have a one-day break from marking to refresh one's brain before getting back into it. Tutoring, by which I mean 'facilitating discussion by the students' is sort of interesting... Of course it is much more interesting for all concerned when the students actually do the required reading which would - if they did it - provide something to talk about. Otherwise I just can't stand the silence and tend to fill it myself with, well this week, stories of how Aphrodite was responsible for the Trojan War, to a large extent. This led into comparing the Aphrodite in the Iliad with the one in the Homeric Hymn to Aphrodite, as well as highlighting links suggested in the Hymn, to Anatolian Kybele. Sure, I was veering off into Classics when I should have been in archaeology discussing the mound of Hisarlik (pretty much believed to have been Troy) and its layers, but hey... it's really the students who should be filling the void, not me! Today I made them get into groups, read the reading that they hadn't read, and then answer the question "What were the relationships between the Greeks, Trojans and Hittites?" It wasn't that successful because that was one of the most complicated sections of the reading, but if I had not done it, they'd have all stared at me expecting me to answer it. As it was, I put it back on them... Ha. I might try that again tomorrow. I am starting to see how students at university can be of interest to Romanist academic blogger, Mary Beard. In a previous comment to one of my blogs I was saying how I liked her blog but not the bits where she discussed how students can get into Cambridge... now that seems more interesting to me, seeing as I am dealing with the cream of school-leavers in my own tutes. Pity some of them don't realise how special a place at our university is and that they shouldn't slack off and waste it. Many of the students are brilliant, for what must be 18 year olds, I'm constantly astonished at some of them. Some of the work I am marking is extremely sophisticated. I can only imagine where they'll go with such brains!
Posted by Caroline Tully at 4:10 AM