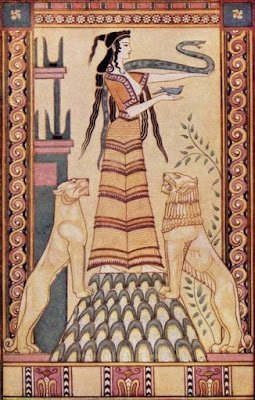 According to Goddess-Feminist history, the Great Goddess was the original, and only, deity of humankind from the dawn of time up until around 3000 BCE, when Goddess-oriented cultures were conquered by patriarchal, warlike worshippers of a sky god. Late Bronze Age Minoan Crete (1750–1490 BCE) is considered to be the Goddess culture’s final flowering, believed to exhibit the last gasp of the feminine values associated with Goddess culture before it was wiped out by warlike, patriarchal Mycenaean Greeks. Before this time Minoan Crete was peaceful, worshipped the Great Goddess and her Dying and Rising Consort (who was also her son), and women and nature were respected. Join Dr Caroline Tully in a workshop on ancient Minoan religion, focussing on the Snake Goddess. Find out about the claim that on Crete the snake appears in the worship of the female deity more repeatedly than anywhere else in the Mediterranean. Focus will be on ancient artifacts that depict female figures holding snakes in their hands or with them coiled about their bodies, suggesting that they were an integral part of the religious rituals. There will also be a practical component on methods to achieve altered states of consciousness using techniques you can take away and practise at home. Through images, discussion, and practical trance exercises, contemporary approaches to Minoan religion will be revealed.

In person workshop at Muses of Mystery

Posted by Caroline Tully at 5:34 PM