The Lady of the Moon and the Goatfoot God: Witchcraft and the Zodiac 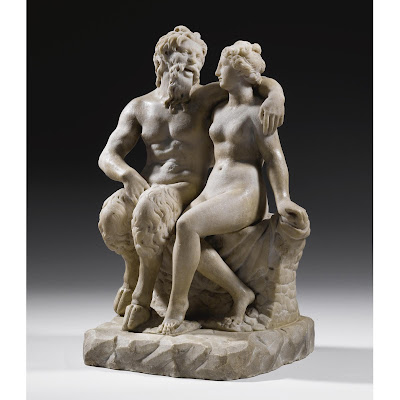 Our Lady of the Moon, enchantment’s queen,
And of midnight the potent sorceress,
O Goddess from the darkest deep of time,
Diana, Isis, Tanith, Artemis,
Your power we invoke to aid us here!
- Doreen Valiente

Hear me, Lord of the Stars,
For thee I have worshipped ever
With stains and sorrows and scars,
With joyful, joyful endeavour.
Hear me, O lily-white goat
Crisp as a thicket of thorns,
With a collar of gold for thy throat,
A scarlet bow for thy horns.
- Aleister Crowley

The Gods of Witchcraft are a pair, a dual deity, a Goddess and Her consort the God. Like the Chinese symbol of Yin and Yang, the Goddess and God of Witchcraft are complementary and inseparable, two sides of the one coin. This holy pair are often symbolised by such natural phenomenon as the Moon and Sun, the Earth and Sky or the human female and a mythical goat-footed male. In many modern Witchcraft traditions, the Goddess is envisaged as ‘ruling’ the Summer months of the year from the Vernal (Spring) Equinox to the Autumnal Equinox while the God rules the Winter part of the year from the Autumnal Equinox to the Vernal Equinox. This assigned rulership gives us an indication of which Zodiac signs are attributed to the God and Goddess. Being a shapeshifter the God/dess can manifest through each of the twelve Zodiac signs, however the two Solstice points of Cancer and Capricorn are their specific celestial thrones. Astrologically speaking then, the Goddess is signified by the sign of Cancer and the God by Capricorn.

Cancer, symbolised by the crab and ruled by the Moon, is the sign in which the Sun enters at the Northern Solstice point (being Summer in the Northern Hemisphere and Winter in the Southern Hemisphere). Solstice literally means "Sun stands still", the Sun reaches its most Northern or Southern declination at the Solstices which occur around the 21st of June and the 21st of December each year. The Tropic of Cancer, a line of latitude on Earth which marks the Northern Solstice point, is found at the latitude of 23.5 degrees North and runs through places such as Calcutta, Cuba, Hong Kong and Taiwan. The Tropic of Capricorn, which marks the Southern Solstice, point is found at the Latitude of 23.5 degrees South and runs through Australia at Alice Springs and Rockhampton.

The Zodiac sign Cancer is the least visible of the constellations and has been called by the ancients the "Power of Darkness." Cancer is the sign of the gentle darkness of the sea, the womb and the night. In the Horoscope, Cancer rules the 4th House which is the domain of family, the mother, home life and the past. In Witchcraft, Cancer and the 4th House signify the nurturing domain of the Coven. Its symbol has most often been a hard-shelled creature: a tortoise, scarab, crab and crayfish. Ancient Astrologers saw Cancer as the gate through which souls came from the sky to incarnate on Earth. The boat or Ark is an alternative symbol for Cancer. In many different cultures, the boat represented the womb that carried the child passenger as well as the vulva through which the baby passes into life, for the vaginal opening has the shape of a boat. Cancer is the Cardinal sign of Water, Cardinal signs being "beginnings" or "first impulse"; another reference to birth-giving with the amniotic fluid signalling the onset of birth. Because of the long connections of this sign with birth and fertility and its rulership by the Moon, Cancer has been associated with the Great Goddess as Mother. The writer and poet Robert Graves describes how one of the myths of Hercules emerged from an age of struggle between patriarchal and Goddess-worshipping cultures. In Hercules’ fight with the Hydra (which Graves sees as representing the Goddess religion) the crab fought on the side of the Goddess, pinching Hercules on the foot. For this service the Goddess placed the crab in the heavens as a constellation.

Cancer’s polar opposite on the wheel of the Zodiac is Capricorn, the Cardinal Earth sign, which is symbolised by a goat and is ruled by Saturn. In the Horoscope, Capricorn rules the 10th House, the area that is concerned with career, ambition, the father and the world outside the home. The constellation of Capricorn was identified by the Babylonians who saw it as a fish-goat who has a goat’s head and front legs and a fish’s tail. This image was associated with their God, Ea, "the Antelope of the subterranean ocean" and myths tell of the hero who appears out of the waters of Ea and brings the arts of civilisation to the shore: agriculture, astronomy, mathematics, reading and writing, architecture and medicine. The goat has long been regarded as holy, in Greek myth Zeus placed the she-goat Amalthea in the heavens as a reward for suckling him as an infant, European legends tell of a love Goddess who appeared to her beloved clad in a net and riding upon a goat. Goats were sacred to the Welsh Goddess Blodeuwedd and the Middle Eastern bearded Goddess Mylitta also appeared naked and riding upon a goat. The Greeks represented Pan, the great God of the wild and untamed places, as having the legs and horns of a goat. In one story he is turned into a fish-goat like the Babylonian Ea. Pan survived in medieval Europe as the goat-footed God of the Witches and the consort of their Goddess. The church fathers turned the figure of Pan into the devil and the cloven hoof, once the sign of the Goddess’s lover was regarded as evil.

Thus the Goddess traditionally rules the Summer from Her throne in the constellation of Cancer, which is the Zodiac sign of the Northern Hemisphere Summer. She is the bearer of the Grail of amniotic waters, who holds the world floating in Her womb. She faces the God across the Zodiac who rules the Northern Hemisphere Winter, enthroned upon the constellation of Capricorn, reposing at the zenith of the Zodiac while the goat leaps upon the summits of the Earth. Astrology evolved in the Northern Hemisphere, as did European Paganism. In Australia the Zodiac signs of Summer and Winter are reversed; the Sun is in Cancer in Winter and Capricorn in Summer but the Zodiacal symbolism is still valid as symbolism, even though the signs are reversed.

Posted by Caroline Tully at 8:02 PM