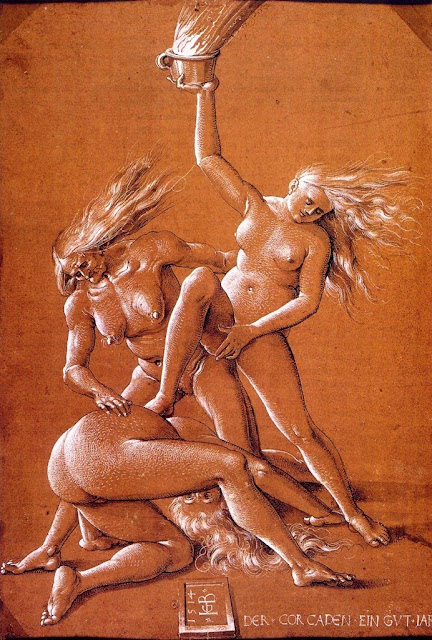 Readers of London pal, Ethan Doyle White's, blog Albion Calling, may have seen the recent interview with Professor Ronald Hutton there in which he, among other things, discusses his book on Shamanism. He says there were two reasons why he wrote a book on Shamanism, the second reason being "Carlo Ginzburg's promotion of a universal archaic shamanism as a key influence on early modern images of witchcraft." We all know who Carlo Ginzburg is, right? Author of books useful to modern Witches such as The Night Battles, originally published under the title I benandanti, and particularly Ecstasies: Deciphering the Witches' Sabbath, originally published as Storia notturna: Una decifrazione del Sabba.


Ginzburg's work is often cited by Pagans as some sort of "proof" regarding Witches that counters Hutton's and other sceptical Witchcraft historians' work. But there is no need to polarise the approaches. It's not really an "either-or" situation. Historians of Witchcraft - including Ginzburg - are discussing this, that is Ginzburg's theories of Witchcraft, and there are published results from the Harvard Colloquium Nocturnal Histories: Witchcraft and the Shamanic Legacy of Pre-Christian Europe. I have a copy of this if anyone wants it.

The history of Witchcraft is an ongoing project, and as you can see from Hutton's latest interview there is some pretty interesting scholarship fermenting away right now at Bristol. (Can't wait for that!) Anyway, the main purpose of this blog post is to direct readers to an interesting review essay on Ginzburg by Perry Anderson at the London Review of Books (yes its old, but still worthwhile to get an understanding of Ginzburg's methodology), also a review of Storia Notturna (from 1990, and only partial unless you subscribe, but still interesting).
Posted by Caroline Tully at 8:21 PM

Caroline, I would love a copy of the Harvard proceedings if you still have that available! My email address is listed on my blog.

I would love a copy as well. I really appreciate your generosity. :)

Peter, I've sent you a copy, but Jasmine I can't find your email address.

Were the Harvard proceedings published in some forum, or are you referring to some more informal product?

Archaeology, consistently warned off religion by wise old heads, here rushes deeper into the thicket to tackle the thorny topic of ancient witchcraft. The occasion was a seminar at Harvard organised by Stephen Mitchell and Neil Price to mark the twentieth anniversary of Carlo Ginzburg's influential book on the connections between witches and shamanism – and by implication the possible connections with prehistoric ritual and belief. Archaeology was by no means the only voice at the meeting, which was attended by scholars active in history, literature, divinity and anthropology. The discussions revealed much that was entangled in the modern psyche: ‘don't let's tame strangeness’ was one leitmotiv of this stimulating colloquium. A romantic attachment to the irrational is a feature of our time, especially among academics. But maybe taming strangeness is an archaeologist's real job…

Do you want me to send you a copy?

That is exceedingly kind of you, but there's no need. My university affords me access to Antiquity in electronic form (there's a joke somewhere in that fact...) and I've downloaded a copy. Thank you anyway!

Caroline, I would love a copy of the article, please

I think you ought to check your bias and objectivity in terms of Ginzburg and familiarize yourself with authors whose research substantiates his positions since you seem to be conflating divergent positions, neither of which has been proven, sense stricto, with "disproven"; rather than continually erecting a straw man argument as though Ginzburg and his European academic coevals provide no evidence of any worth, and have got it all wrong! Remember, also, that the late Norman Cohn attempted to misrepresent the views of Ginzburg prior to the publication of its English translation in order to discredit him, just as Cohn had done to Murray! (Look it up by comparing/ contrasting Cohn with Murray if you don't believe me!) Amidst my favorite authorities include (but are far from limited to): Eva Pocs (she analyzed over 2000 source documents--something that Hutton has never done since he has only cited second and third-hand scholars, often misrepresenting their views in doing so, such as even misrepresenting Prof. Pocs--which has allowed Pocs to conclude that pagan Indo-European shamanism was at the heart of European witch-beliefs), Tekla Domotor, Jean Seznec, Wolfgang Behringer, Claude Lecouteaux, Paolo Portone (I have translated his work and he does in fact demonstrate the survival of paganism into medieval Europe into the development of the witch-figure and allied beliefs), even JB Russell says Paganism survived and influenced medieval witch-beliefs, as does a book edited by Carlos Steel and Ludo Millis respectively ("Paganism in the Middle Ages" and "The Pagan Middle Ages," which Hutton has misrepresented, which wouldn't be the first time), Bernadette Filotas, Stephen McKenna, Robert Muchembled, and Emma Wilby and Carmen Blacker (both of whom are very British!), as well as John Darah, David Lederer (an Irish scholar of Witchcraft Studies), and an American academic, Randy P. Conner who has demonstrated in his published/ accepted/ peer-reviewed/ defended Doctoral dissertation the cyclical revival of worship of Roman deities in medieval France--i.e., Bacchus, Ceres, Isis, Minerva, and Jupiter, etc.--whose worship again arose during the periods of the Enlightenment and during the French Revolution! I have many French friends--some Pagan and some non-Pagan--and they have even told me how common knowledge it is that the worship of these gods surviving to such a late date is within the French public educational system; they can't imagine any historian reasonably rejecting what they know to be true based upon this historical documentation at hand! They would call such a scholar utterly ignorant. The moral of this post is, don't put all your eggs in one basket.

Did you even bother to read Caroline's post before going off on your (obviously practiced) rant?

"But there is no need to polarise the approaches. It's not really an "either-or" situation."