Götterdämmerung or When Bad Things Happen to Good Valkyries 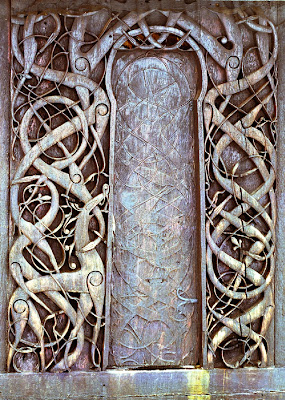 The description of the end of the world in Scandinavian myth is found in the Völuspá, which is part of the Poetic Edda. The rooster, Goldcomb, wakes the heroes in Odin’s hall who come forth to fight. Heimdall’s horn sounds the alarm, and Mimir’s [oracular] head tells Odin that the end is nigh. The Rainbow Bridge between Asgard and Midgard crumbles to dust and the cosmic tree, Yggdrasil, shakes. One by one the gods go forth to fight the various menaces that spring up, and then they die. The wolves that ate the sun and moon run free and darkness covers the world… Eventually the chaos ends and


She [the seeress of the Völuspá] sees the earth rising again / out of the waters, green once more; / an eagle flies over rushing waterfalls, / hunting for fish from the craggy heights.

So, is this what happened in the final opera of Wagner’s Ring? Kind of. As I said in a previous post, this opera is not a re-telling of traditional myth but a new story based upon components of Scandinavian and Teutonic myth. I’ve explained the plot of Götterdämmerung below, so now that its all over, I’ll provide my impressions of the Melbourne Ring Cycle overall.

As I said in my previous post, this is a non-traditional, post-modern production. There are no “heroic” Norse-style references either in costume or set design. I understand that sometimes these can seem cliché and predictable, however I can’t say that I am a fan of the complete absence of a heroic – as in elaborate and over-the-top – look of Neil Armfield’s vision for the Melbourne Ring.

While generally the stage design is interesting, what with taxidermied animals, a big spiral ramp that linked Asgard to Midgard, and I especially liked Acts I and II of Siegfried in particular the treatment of Fafner, and in Götterdämmerung the way Siegfried’s corpse was dealt with, on the other hand, the overall look of the production is sparse. But by that I do not mean minimalist, which is another aesthetic kettle of fish entirely.

By “sparse” I mean that the design attitude seems to be “how can we reduce this?” – possibly a decision made so as to communicate the essence of the scenes as directly as possible. The equivalent of using as few words as possible in a sentence. Consequently, whenever anything visually interesting does appear, one devours it – and there certainly are some eye-catching components of this opera.

However….the costumes are mainly vile. Could everyone look any plainer? (Especially you, Norns!) OK, there is a bit of gold in the garments of Freia and the wood bird, that’s fine, but the decision to costume everyone else in “regular” street clothing is just visually boring. Camp it up, I say! I think the approach to the costumes may have been an overall design strategy in which the music and singing – both heroic and enormous – were foregrounded, well, that’s fine, this is opera after all, and the costumes were subdued in order to avoid the charge of sensory overdose. But I don’t think this would have been a problem, not for me anyway.

Opera is not just about the music and singing, otherwise there wouldn’t be acting as well. There are a million things that could be done with costumes for this opera. I think the drabness of the Melbourne Ring costumes – as, I suspect, an attempt to tone down the Huge Mythic Themes of this particular opera – isn’t doing it any favours. Turn It Up, I say! And it’s not a matter of introducing more sparkly lamé, or necessarily full-on traditional “Norse” style costumes (as much as I like them); it’s about matching the look with the story and the sound – all of which are larger than life. All Of Which!

The costumes of the Valkyries win my vote for Most Atrocious. I really don’t want or need to see ugly, plain, military shirts and pants on a Valkyrie. I see enough of that on the television news. Do it if you must, costume designer Alice Babidge, but at least exchange the blands-ville cotton drill for sequins. Being “contemporary” and “realistic” is so ordinary. It’s also patronising to the audience, Oh, we’re too dumb to draw parallels between pre-industrial and modern warfare. Thanks for really explaining that to us.

The set design is better than the costumes. In Act I of Das Rheingold there was even a copy of the original painted backdrop used at Bayreuth – through which the giants Fasolt and Fafner smashed on their cherry pickers. This production was supposed to have an “environmental” message, and so it did, which I guess was basically a bit of an updating of the allegorical message of Wagner’s time – but it was only evident up to and including the second opera, Die Walküre. Then it entirely petered out.

The message was conveyed through the use of the taxidermied animals, some of which were endangered or extinct – a Tasmanian Tiger! – which appeared in crates, as though they’d been lent by the museum and hadn’t been unpacked. At other times they descended from above and hung in the midst of the spiral “car park ramp”. There was also a slightly tawdry Las Vegas visual sub-theme, which while thematically puzzling and incongruous, actually added bit of prettiness – even though it jarred with the rest of the visual theme(s).

So much for what the Melbourne Ring looks like – but what does it SOUND like? Well, impressive. I can’t do justice to it here so you will have to attend an opera or listen to a recording. What I’ve noticed in attending this live mega-opera, and which completely eluded me when listening to a recording or watching a film, is the way the music is continuous – no gaps in between in which to applaud a feat of virtuoso singing. The audience is silent throughout until the end of each act when there’s room for clapping. I also found that I could recognise the leitmotifs – musical motives associated with characters, objects, events and emotions. Hearing these is probably extremely obvious to a Wagner expert, but in my case it probably helped enormously that I had done reading about and listening to The Ring in the fortnight up to the start of the opera.

And then of course there’s the singing… Although I’ve been attending opera performances since around 1990, in varying degrees of intensity – sometimes several in a year, sometimes none for a decade or so – I’m not what could be described as a super-enthusiast or devotee (obviously, otherwise I’d be going all the time), nor am I an expert on opera singing. Fortunately, in this case I attended The Ring with my expert friend, who is a super-enthusiast and devotee, and who filled me in on the nuances of the voices and music, and the successes and failures of the singers and orchestra, while I felt more comfortable critiquing the costumes and sets.

In regard to the Melbourne Ring, my expert friend's assessment was that while Susan Bullock is not a true Brunnhilde and is working with a diminished vocal range, hers was an intelligent, studied characterisation. He thought that Stefan Vinke (Siegfried) was indefatigable in his delivery and that he met the taxing demands of the music on his upper register, and overall, that Terje Stensvold's (Wotan) was the most convincing performance. While I can certainly hear obvious shrieks or croaks when voices misfire, I’m less aurally attuned to whether a singer is singing properly or shouting, so I’m fortunate to have my expert friend filling me in. I take his word for it regarding the quality of individual singers and try and listen more closely.

Besides immersing myself in an enormous visual and aural artistic experience, another reason I attended the Melbourne Ring is because I am interested in the “Reception” of myth, in this case Scandinavian and Teutonic myth, as expressed through the lens of German Romanticism. Also, I adore the 19th century, particularly in regards to the utilisation of aspects of the ancient world. So much of 19th century thinking about the ancient world has been influential on the 20th century, and into the 21st, both in its initial acceptance and then regarding the critique(s) thereof. Plus, I actually like opera, but I definitely prefer the more serious, mythic type – such as The Ring – to frivolous and unimportant ditzy operas.

So, now I’ve seen an entire Ring, and my, how actually attending a performance filled in all the gaps that I didn’t even notice were there by just listening to it or watching a film. Now I’m wiser in the ways of Wagner, a little bit. Overall, did I enjoy The Melbourne Ring? Helrunar Yes!
Posted by Caroline Tully at 6:36 PM

I've got to tell you Caroline that I'm entirely impressed with your ability to sit through that entire arse and brain numbing series - you'll never have to do anything else to convince me that you're brave.
My principal personal aversion to the Ring cycle is that you sit there for at least 45 minutes thinking "ffs - give us a bloddy tune" - it's all maundering, no recitative. It's just bloody painful.
I know that the counter argument to this is that "I just don't get it", and I don't - and I don't care, like Monty Python's Pope "I don't know much about art, but I know what I like". (& I don't like Wagner)

Hello Ian, well, there's nothing really to "get" in my opinion. The story is the story. It's loosely based on myth, but I don't think its particularly esoteric. I do think that it's wise to familiarise oneself with it before hand. I think I'd be puzzled with certain aspects if I hadn't. There are some tunes in there... that can be separated out. I was rather impressed at how it all joined together though. And sitting through it really wasn't such a feat... although it was tiring. I could easily go it again.