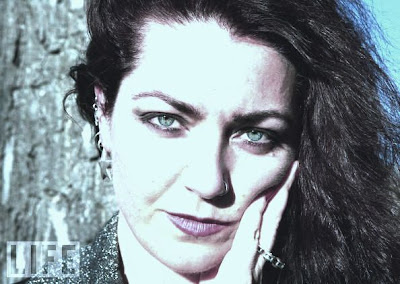 I've just come back from a fabulously stimulating time in San Francisco during which I attended the American Schools of Oriental Research (ASOR) conference and the American Academy of Religion (AAR) conference. I'll report on ASOR later and concentrate on the AAR for the moment. Now that I've presented my paper at the AAR I will post my original proposal here - which I wasn't really even sure would be accepted. But it was, so I had to work hard on it, fortunately it was built from the paper I presented mid year at the Archaeology and Narration Conference at Melbourne University. Here it is:

Researching the Past, is a Foreign Country: Cognitive Dissonance as a response by practitioner Pagans to academic research on the history of Pagan religions.

Modern Paganism is a new religious movement with a strong attachment to the past. Looking back through time to an often idealised ancient world, Pagans seek inspiration, validation and authorisation for present beliefs and activities as espoused in the familiar catch-cries of “tradition”, “lineage” and “historical authenticity”. A movement that consciously looks to the past and claims to revive the ancient religious practices of pre-Christian Europe, modern Paganism has always been dependent upon academic scholarship—particularly history, archaeology and anthropology—in its project of self-fashioning. Dependant primarily upon late nineteenth and early twentieth century scholarship, Pagans often vociferously reject more recent research, especially when it contradicts earlier findings, perceiving it as threatening to their structure of beliefs and sense of identity. Not only do the results of such scholarship traumatise Pagans—however unwittingly on the scholars’ part—in some cases it rebounds upon the researchers themselves when Pagans seek to traumatise the scholars, the “bearers of bad news”, in return.

This paper will present case studies which display the contested nature of the past by highlighting the combative interaction between Pagans and academic researchers at three types of site-as-stage: the text, the archaeological site and the museum, and explain how the performers fail to communicate as a result of speaking different “languages”. The paper will initially focus upon the frequently negative reception, by Witches, of recent historical research on modern Pagan Witchcraft. It will also look at Goddess Tours to Crete and other ancient Mediterranean sites, as well as the “new indigene” prevalent in British Druidry and their involvement in the dispute regarding access to and interpretation of archaeological sites and museum objects. The paper will then discuss the infusion into Paganism of hybrid vigour through the activities of the Pagan Studies scholar, a researcher often in the role of participant-observer, who can function as a “go-between”, easing the sense of resentment by Pagans toward the perceived colonisation of their religion by “hackademics”.

Posted by Caroline Tully at 8:10 PM

I actually ended up using Catalhoyuk in Turkey as my archaeological example rather than Crete. If I had more room/time I may have kept Crete in there. Such as fascinating topic - the reception of the ancient world in contemporary Paganism. But it's not my actual PhD thesis topic... that's Sacred Trees which I presented on at ASOR. Reception is a side interest of mine based on my position as a practitioner Pagan, coming from Paganism to academia.

I don't know, Cazz, I suspect the hostility of pagans towards academia is to some extent in the rear-view mirror these days.

I was interested to see Liz Williams (a pagan) in the Guardian talking about Glastonbury. She could hardly wait to debunk the idea that the place has links to pre-Christian paganism. For many, I suspect a reverse process - so eager to identify with a scholarly perspective, and the authenticity that it connotes, that a degree of cultural cringe is exhibited.

Well I think my paper went down pretty well at the AAR. It was mainly saying that scholars and Pagans need to talk to each other more, and that they are in fact talking past each other.

Yes, indeed the paper was well received and I will add well presented. Not only well argued but presented in a humerous, engaging manner.

Gavin my sense is that there is a subgroup of Pagans that remain hostile and another subgroup that embrace what they learn from academics--both are there and both can be pointed to. And of course there is often a lag, with one individual beginning as hostile and then chaning directions on further reflection and possibly as they find others who are moving in that direction.

So sorry I missed this, Caroline, as I'm quite interested in Pagan/ academic ineractions and feedback loops. I'd love to see a copy, if you're willing to share it with me. In return, I can send you an article of mine that will soon be published in a collection on human rights and heritage, on the British reburial controversy and Druidry.

Helen, I don't disagree - with a movement as diverse as paganism, all kinds of reactions and interactions are going to play out between paganism and academia, especially surrounding questions as central as modern paganism's links with the past.

I agree with Cazz that to some extent academics and practitioner-pagans talk past each other, but I also feel that using the term "cognitive dissonance" in relation to the latter, especially in the title of the paper, is fightin' words.

I am wary of any tendency on the part of academics, even pagan academics, to look down on or be dismissive of non-academic pagans. For several reasons, one of which is that it plays into the hands of those with a vested interest in challenging the authenticity of modern paganism as a spiritual movement.

Gavin, I can see why you would say this. I just need to add that I have suffered from cognitive dissonance in regards to my beliefs about an aspect of the ancient world actually not being true after all myself! Here's how I'm using it in the paper: The theory of cognitive dissonance proposes that people have a motivational drive to reduce dissonance which is aroused when they are confronted with information that is inconsistent with their beliefs. Current research into the ancient world threatens what many Pagans have both intellectually and emotionally internalised about their religion—what they concretely believe—and this causes the trauma of cognitive dissonance.

I also wasn't tip toeing about with the paper either, I'm sick of doing that. And I wasn't just siding with academics, I have an interest in both camps.

I can relate - for some years I believed the translation of paganus as "country-dweller" that is repeated by almost by rote within the pagan community.

With my previous comment I was specifically thinking of the way in which Ronald Hutton's work has been used as a cudgel by many commentators to dismiss and de-legitimise Wicca in the public eye - in a fashion I doubt very much he ever intended.

I do think it is fascinating that in a religious movement noted for not constructing itself on foundations of 'right belief' and orthodoxy, people could still suffer the sort of trauma you are talking about.

Personally, and I'm not sure I can cite anything beyond personal observation here, but I strongly suspect that issues of lineage and historical authenticity are not as central to pagan identity as they were a generation ago (people like Ben Whitmore notwithstanding.) I like to think I have a fairly wide range of acquaintances in the pagan scene, and it is difficult to remember the last time lineage even came up. To say nothing of Margaret Murray-esque notions of pan-European witch-religions.

Oh well. Perhaps a pagan academic in the 22nd century will write a paper on pagans of that time who will cling to outmoded and erroneous late 20th and early 21st century scholarship - a point, we need to keep in mind, that reflects upon the nature of academia as much as it does pagans.

My paper was very much motivated and influenced by the brou-ha-ha that errupted on several academic blogs, such as Chas Clifton's 'Letters from Hardscrabble Creek' and Peg Aloi's 'The Witching Hour', as well as on practitiioner blogs such as 'Talking About Ritual Magic', in regards to Peg and Chas's criticism of Ben Whitmore's book, 'Trials of the Moon.' As well as Hutton's witchcraft historigraphical article in which he addresses Ben Whitmore's book (available free in Pomegranate Vol 12, No.2) as well as Peg Aloi's review of Whitmore's book, also free in that issue. You need to be familiar with all those conversations to know who is making a fuss about current scholarship into contemporary Paganism's history and who has a problem with historical lineage/transmission.

Late to this conversation but of course I'd also very much like to have been there for your paper Caroline! Cheer and Happy 2012 to you.