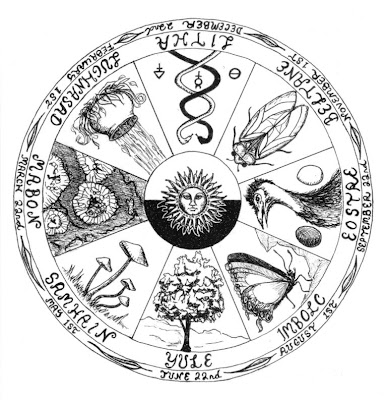 It is a season of extremes and contradictions. Bushfires in the south and cyclones in the north threaten to engulf the land, and yet, the water regenerates the indigenous plant life and so too does the bushfire: many native seeds require burning before germination. Life and death dance upon the same ground. This is a time to appreciate the inscrutable wisdom and power of nature. Earth is the cauldron and all beings are transmuted by her alchemy.
Posted by Caroline Tully at 1:13 AM

The "power of nature" is really cool, especially when your bedroom is filled with a bright, pinkish-orange light coming through the window.

I agree, but I don't want to sound like I'm writing for "Bubble-Head Spell-Poop Magazine" when I'm talking about it.

I like the bits I wrote (in Doug's edited book) describing what happens/ed at traditional European sabbat times in Australia, but I'm now not so hot on my 'meditations' that acompanied each sabbat description. I think they sound preachy. Maybe I'll change my mind and like them again by Lughnasad?