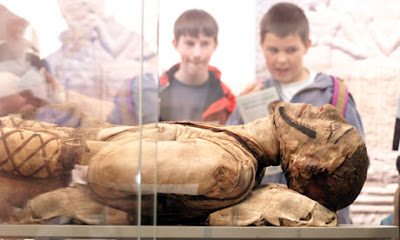 Modern Druids are making a fuss about ancient human remains on display in museums in Britain. How it is any of their business one cannot begin to guess. I suppose they need to think of ways to stay in the media's ever-hungry headlights... and claiming to be 'new indigenes' - likening themselves to colonised peoples such as Australian Aboriginals or Native Americans who do have a legitimate claim to have their actual relatives owned by museums re-buried - seems to be working for them. It is difficult however, to see how Druid claims regarding museum objects such as, for example the Babylonian plaque, the 'Queen of the Night', are actually 'Druid'. The behavior of Honouring the Ancient Dead (HAD), the group spearheading this activity, is unnecessary, appears contrived, and smacks of self-publicity under the guise of a virtuous ‘cause’. Not all contemporary Pagans are pro-reburial of human remains in museums however, see Pagans for Archaeology ,
Posted by Caroline Tully at 4:27 AM

A very interesting post, Caroline. I do wonder, though, how - if they *were* the remains of actual inhabitants of the British Isles - the Druids don't have some sort of a claim for at least respect for the remains, just as Australia's Indigenous people do? I don't know. I admit it's not something that I have considered in detail until now. Thanks for bringing it up!

DNA wise I have as much claim as the druids do. In fact I think you will find that a large number of people in the UK have a claim.
Unless they can prove direct linage then their case does not hold. As far as respect goes, this particular group of druids appear not to have done their homework. Many of the remains found were already disturbed in prehistory. Human remains have been found on settlement sites and in the long barrows complete skeletons are not always found. Often only parts of bodies are so they were not left in peace even by their own families. This seems disrepectful to us but obviously wasn't to them.
The issue is much more complex than the druid groups would have you believe.

Thanks for mentioning Pagans for Archaeology. I studied this area for a research project for my MA. The druids are not claiming genetic lineage, as they are aware that just about everyone in Britain is descended from ancient Britons. They are claiming cultural continuity. This idea can be debunked pretty quickly by reading Ronald Hutton's book The Druids, which shows that we know hardly anything about ancient druids, and therefore claims of cultural continuity are very spurious indeed. Heathens might have a better claim, but even there, there are significant differences between modern and ancient Heathenry.

The case for retaining human remains vastly outweighs the arguments for reburying them, in my opinion.

Inciteful posts and article, thank you. Personally I have felt for a while that some of the more outspoken "media" pagans on this topic are being so more for self-publicist reasons than for care of the dead. Before moving to Orkney, I taught A level Archaeology and found taking teenage students to view Charlotte/Charley at Avebury provided a very real lesson in life-values for them which I knew they would take with them into adult life. I am also not convinced that modern paganism has a direct lineage with ancient pagan practices, even though I find ancient pagan sites spiritually meaningful myself, but I am not threatened by that concept - I do not need my beliefs to be "old" to be valid.

But when the 'human remains' belong to someone from, say, the Neolithic period, it is just _so long ago_ they'd be related to heaps of people now... not just modern Druids - who aren't actually a 'race' anyway, or a 'DNA group', but a religion....

Seems that this word "idigenous" floats up all sorts of odd stuff... The BNP hijacks it in one corner and the Druids in another... If you actually look at Mitochondrial DNA then we are ALL related the mixer that is "modern communication systems" has worked to make all of us indigenous TO THIS PLANET.. some of us hold special loyalties to areas and places where we percieve out "tribes" to originate.. For some folks this may well be within Britain, as it is for others the Americas or Australia, but we are all part of one world... Go back far enuff and we all are "late arrivals" (unless you look at S. Africa, where Homo Sapiens can be said to have originated).. Give the dead respect, give each other respect, In the words of the prophets Bill + Ted "Be most excellent to each other, and party on, dudes"...