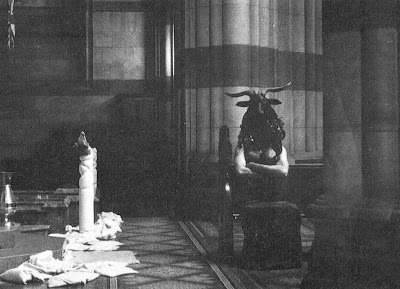 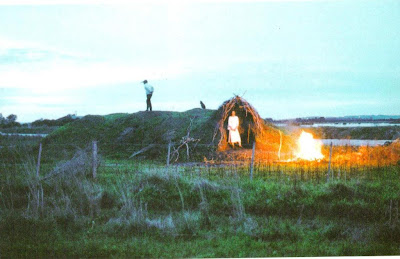 I was amazed when I first saw a photo of Kevin Mortensen's 1973 performance 'St Paul's Performance' (in Art and Australia Vol.33. No.3. 1996. Page 372) in which he (and sometimes others when he needed a rest) sat in the back pew of St Paul's Cathedral, Melbourne, Australia, wearing a goat-head mask - just like the one Witches wear. During the Cathedral's festival week he appeared every day for one hour during Evensong in this garb. It would simply never happen now, at least I don't think it would, as the Cathedral officials and visitors would be way too religiously scandalised. I'm pretty sure they would not find it humourous, or a type of comment, and would see it as frightening or insulting. But perhaps I'm projecting too much what 'they' would think? I also like this still from the video 'The Ibis and the Song' 1993. Apparently Mortensen became a Buddhist in Korea in 1983. The Art and Australia article quotes this philosophical explanation, but does not make it clear whether it comes from Mortensen or the Korean Buddhists. The article says 'From him they took this philosophy:'
In Christian, they believe that God makes everything. But Buddhist we believe that only mind made them all.
We are nature, too.
Science make our body easy and idle as well as our mind no good way.
We have to find our original face before we were born.
There's the moon in the sky. In the pond in the dead-fire mountain there's the moon too. But those who have dark dirty mind can't see the moon in the pond.
Body's power, energy is producting from his mind. By one's mind condition distance, weight, and time not important.
We have not watch for freedom, but we can read the time by the sun's position.
I have Buddha myself.
Posted by Caroline Tully at 12:30 AM

Okay, I love the first picture. For me it is the demonization of the Goddess by Christianity. Well who knows, but that is what I like about it.
It is the second picture that I would like to know more about. It seems it is a barrow. I tried following your links, but got nowhere. Is it a home?
Rhondda

In addition to wearing the mask, he is shirtless and wearing a skirt. The parallels with Levi's "baphomet" are obvious but seeing it presented in stark reality on a rear church pew is strikingly cool. Yeah, have to agree, 'twas gutsy then and probably dangerous today.
-RtM